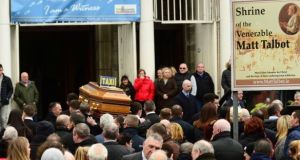 The funeral of Eddie Hutch snr at the Church of Our Lady of Lourdes on Seán McDermott Street, Dublin.

A man has been arrested in connection with the murder of Eddie Hutch, who died of gunshot wounds to the head after he was attacked in Dublin on February 8th, 2016.

The father-of-five (58), a taxi driver, was shot at his home in Poplar Row as part of the Kinahan-Hutch feud.

On Tuesday afternoon, gardaí arrested a man aged in his late 20s in the northside area of Dublin. He was detained under section 30 of the Offences Against the State Act in a Garda station in north Dublin.

Hutch was a uncle of Gary Hutch (34), who was shot dead on September 24th, 2015, at an apartment block near Marbella in southern Spain.