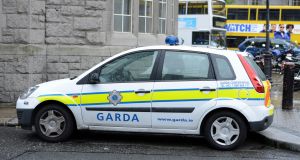 Last year 236 old Garda vehicles were withdrawn and replaced with only 205 new ones. Photograph: Frank Miller

Gardaí are being forced to rent cars “like tourists” due to an ageing fleet, with new figures showing a sixfold spending increase on hire cars since 2016.

The increase looks set to continue this year. So far in 2019 nearly €41,000 has been spent on renting 48 vehicles. Most of these were rented by Dublin divisions.

However, the Special Detective Unit, which investigates threats to State security, has been forced to hire nine vehicles from rental companies.

It is understood the money spent on rentals has skyrocketed because a large number of Garda vehicles are reaching the end of their operational lives at the same time but are not being replaced quickly enough.

Forty-four Garda vehicles have been withdrawn so far this year but only 16 new ones have entered service.

Last year 236 old vehicles were withdrawn and replaced with 205 new ones. The Dublin West Division lost 31 vehicles and received only six new ones.

Hired cars are not used for emergency responses, a Garda spokesman said.

“[An Garda Síochana] is continuing to upgrade and grow its fleet,” he said, pointing to the introduction on Thursday of several new road policing vehicles.

Fianna Fáil justice spokesman Jim O’Callaghan, who obtained the data through a parliamentary question, said gardaí should not be forced to rent cars “like a tourist”.

“The gardaí must have the resources and equipment available to enable them to respond to threats as they arise.

“These hire vehicles are not appropriate to respond to emergency calls. However, they are replacing both marked and unmarked vehicles.

“Although the Minister for Justice has stated that the use of these hire vehicles is occasional, the details of spending released to me indicate that the practice has increased greatly in recent years.”