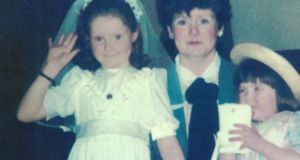 Gardaí have appealed for information on the deaths of a young woman and her two nieces in a house fire in Co Kildare 32 years ago.

The fire at Church Lane, Kilcock on September 20th, 1987 claimed the lives of Barbara Doyle (20), Mary Ellen Byrne (8) years and Kerrie Anne Byrne (3). Gardaí upgraded their investigation to murder on the 30th anniversary of the fire two years ago.

The children’s parents Aidan (now deceased) and Elizabeth went to a 21st party the locality on the night of the fire. Elizabeth’s sister Barbara was babysitting her two nieces, Mary Ellen and Kerrie Anne in their home.

However, between 3am and 4am that Sunday morning a fire was reported at the house.

A man was arrested for questioning when the case was being treated as a treble homicide. The suspect, who gardaí believe was targeting Barbara Doyle in the fire, was released without charge.

“Gardaí firmly believe that there are persons in the community who have information in relation to this fire,” gardaí said in a statement on Friday.