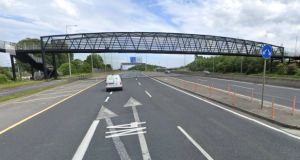 The boys were attacked at a pedestrian footbridge over the N4. Photograph: Google

Gardaí at Lucan are appealing for witnesses following an assault on two boys near Liffey Valley shopping centre last week.

The boys, described as being aged in their early teens, were attacked by a group of “younger juveniles” at a pedestrian footbridge over the N4 at about 5pm last Thursday.

The incident occurred when the two teenagers were crossing the bridge which connect King’s Hospital School and Liffey Valley.

Gardaí said a large number of juveniles approached the teenagers and proceeded to assault them.

One of the youths managed to break free and alert members of the public who came to assist. The juveniles then fled in the direction of Liffey Valley.

Both victims received head and facial injuries and attended Midlands Regional Hospital. They were both later released.

Gardaí at Lucan are appealing for any witnesses to come forward, as well as anyone who was walking on the pedestrian footbridge at 5pm and any road user who may have recorded camera footage while travelling in the area at the time.