Gardaí appeal for witnesses after shots fired at house in Clondalkin 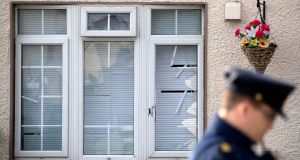 A man was arrested a short time after the incident by members of the armed support unit. Photograph: Colin Keegan, Collins Dublin

Gardaí are appealing for witnesses after a number of shots were fired at a house in Clondalkin, west Dublin on Tuesday night.

The alarm was raised at 9.20pm after shots were fired at a property on Greensfort Crescent, with damage caused to the windows and exterior of the house.

It is understood those involved fled the scene on foot. None of the occupants of the house were injured.

In a follow-up operation a short time later, a man in his 20s was arrested near the scene by members of the Armed Support Unit. He is currently detained under Section 30 of the Offences against the State Act, 1939 at Ronanstown Garda station.

The scene has been preserved for forensic and technical examination. Gardaí are appealing for witnesses to contact the incident room at Ronanstown Garda station on (01) 6667700 or the Garda Confidential Line on 1800 666 111.