Gardaí apologise to young offenders for ‘failing’ to prosecute them 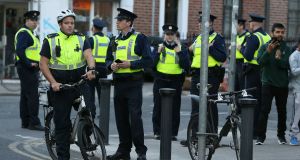 The time and energy gardaí have to expend to compliance work ‘is detracting from the real nuts and bolts of the job’, former State solicitor Michel Murray said. File image: Brian Lawless/PA Wire

Gardaí­ have confirmed they have sent letters to offenders apologising for failing to progress their prosecutions and for precluding them from availing of supports aimed at their rehabilitation.

A review of the Garda Youth Diversion scheme earlier this year established that almost 8,000 reported crimes by more than 3,000 children had gone unpunished and, following this, Garda letters of apology were sent to the alleged victims.

However, it has emerged that Garda letters of apology have also been sent to some offenders in a move described as “political correctness gone mad” by a former State solicitor for Limerick.

Michael Murray, a Limerick-based lawyer who served as State solicitor for the city from 1980 to 2017, said a “well informed source” had told him the letters – which have not been made public by the Garda – “apologised to the criminals for not dealing with them appropriately, and allowing them to escape the net”.

Gardaí have said they were “unable to accommodate” a request to release a redacted copy of one of the letters. However, they confirmed the correspondence included a helpline for offenders should they want to access available support services.

“Each case subject to the remit of the Youth Diversion Review was reviewed by the relevant District Officer in the area where the offence occurred. Where it was deemed appropriate a letter was issued to an offender informing them that their case was not progressed appropriately, together with an apology for this organisational failing and any potential impact which precluded them from availing of certain services which are afforded to individuals within the Criminal Justice System,” a Garda spokesman said.

“They were also provided with details of a helpline where further details of information and support services were available.”

The spokesman said no figures were available on how many offenders received letters.

Mr Murray said he believed the letters were “indicative of an over-emphasis on compliance” by Garda headquarters.

“I have a sense now that management from HQ and the new regime are very heavy-handed, and that there’s too much stick and not enough carrot to bring about the changes that are quite clearly needed.”

Mr Murray said gardaí had told him that “the level of compliance work that they have to do now has inhibited their discretion” and that, “the time and energy they have to expend to compliance work, is detracting from the real nuts and bolts of the job”.

“It is sucking the energy out of the system,” he added.

A spokesman at the Department of Justice and Equality said it “is aware of the serious issues which arose in the handling of certain cases which had been deemed unsuitable for the Garda Youth Diversion programme”.

It said the “Garda Commissioner has addressed these matters” and that the “department is satisfied that An Garda Síochána is making every effort to address this matter and to ensure that there is no repetition of these failures”.