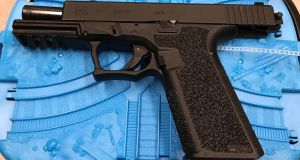 Gardaí have launched a joint investigation with US homeland security agents following the interception of three Glock handguns in the post.

The automatic weapons, which are commonly associated with organised crime in Ireland, were destined for addresses in Dublin before they were discovered, gardaí said.

A follow-up search of those addresses also led to the seizure of a small amount of drugs and the arrests of three people.

In a statement on Friday night, gardaí said the Garda’s Special Crime Operations branch had conducted a joint operation with the US homeland security investigations department “following the detection of automatic weapons due to be delivered to locations in Dublin city and county”.

The search on Friday morning was carried out by the Garda National Drugs and Organised Crime Bureau and Special Crime Task Force and involved addresses in Stepaside, Carrickmines and Newcastle.

A quantity of cocaine and cannabis was seized, although no estimated value or exact quantity was given.

The three people arrested were aged 26, 27 and 38 . They are being detained under the provisions of Section 30 of the Offences Against the State Act at a number of Garda stations in Dublin.

Gardaí said its investigation was ongoing with the support of special agents from US homeland security.