Firearm and cocaine found buried in Laois are seized by gardaí 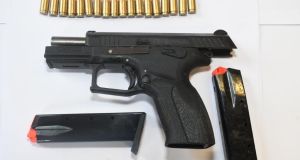 The firearm, a magazine and ammunition were discovered wrapped in plastic and buried on the site.

Gardaí have seized a firearm and a quantity of drugs, which were discovered buried in wasteland in the midlands on Wednesday.

The discovery was made on the Canal Road in Portarlington, Co Laois. A search was conducted in the area at 1pm as part of an intelligence led operation. The firearm, a magazine and ammunition were discovered wrapped in plastic and buried on the site.

A glass jar containing a quantity of suspected cocaine with an estimated street value of €6,000 was also recovered from the site.

The firearm was confirmed safe by gardaí and brought to Portarlington Garda Station. Investigations are continuing.