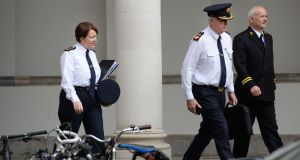 Fianna Fáil is pushing for the Policing Authority to be given more power over the Garda Commissioner as it attempts to avoid supporting a Dáil motion of no confidence in Nóirín O’Sullivan.

The proposals will be taken in the Dáil before a Sinn Féin motion of no confidence in Ms O’Sullivan next month.

The Commissioner told the Oireachtas justice committee yesterday members of the Garda may have “deliberately” recorded incorrect figures that led to one million breath tests that never happened.

She claimed her reform agenda was meeting opposition even in the upper echelons of the force.

She did not go further save to say some people change more quickly and easily than others.

Fianna Fáil justice spokesman Jim O’Callaghan said his party is still not in a position to express confidence in Ms O’Sullivan but party TDs do not want to support the Sinn Féin motion.

The coming days are likely to see further controversy for the Garda with the publication of the final report of the Fennelly commission, which investigated the recording of telephone calls at Garda stations. The report will be delivered to Taoiseach Enda Kenny today.

According to sources, it will find the practice of recording telephone calls took place all over the country for 30 years, and possibly more.

It was originally put in place to record 999 calls and bomb threats, and the system accumulated voluminous amounts of tape recordings.

After 2008, the system was upgraded and digital recordings were kept centrally in Garda headquarters.

However, it is expected it will find it is not clear if the recordings were ever accessed, and senior gardaí were unaware of the existence of the recordings.

It is also likely to focus attention on the role of Attorney General Máire Whelan.

The interim report of the commission, published in 2015, criticised her for “puzzling” and “perplexing” behaviour and highlighted the fact she had changed her sworn evidence to the inquiry.

The Fianna Fáil proposals for the Policing Authority would allow it supervise the office of the commissioner and how the incumbent discharges their duties, among other measures.

Labour published similar proposals, although its motion expressed no confidence in Garda management.

Labour will support Fianna Fáil’s approach but says the authority must be able to direct the commissioner to carry out reforms.

Mr O’Callaghan wants more information from An Garda Síochána about its investigations into the inflated breath test figures, such as exactly when it sought information from the Medical Bureau of Road Safety.

He asked if the data was only sought after an article appeared in The Irish Times in February.

The force knew in August-September, 2015, that the bureau had the data on record.

Meanwhile, the Garda last night refuted suggestions by Fianna Fáil TD Jack Chambers that bonuses for senior officers had been dependent on filling quotas of breath-testing and checkpoints.

A scheme under which some Garda officers received bonus payments closed in 2009 and the last period for which money was paid was 2007.

A Garda spokesman said no senior officers had ever received a bonus payment, adding filling a quota of breath-testing or checkpoints was never a criteria to satisfy for a payment.