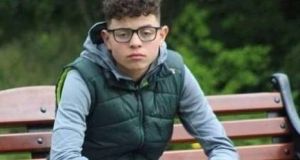 The maximum sentence for carrying a knife in public must be increased, Fianna Fáil’s Jim O’Callaghan has said, following the fatal stabbing of a teenager in south Dublin.

Saying that the death of Azzam Raguragui (18) highlights the “serious” problem of knife crime, Mr O’Callaghan said increasing numbers of young men believe it is acceptable to carry knives.

“It is important that people are aware that carrying knives for no lawful purpose is not permitted and will be severely punished,” Mr O’Callaghan, Fianna Fáil’s justice spokesman declared.

Currently, people can get a maximum sentence of five years and/or a fine for carrying a knife intended to incapacitate or injure another: “The maximum sentence needs to be increased so that there is a real deterrent,” he said.

“I will be seeking the approval of the Fianna Fáil parliamentary party to increase the maximum penalty in order to respond to what is a developing problem. We should not wait further atrocities before seeking to act.”

Most knives are being seized during stop-and-search operations. Many youths are carrying them because they are afraid of being attacked over drug debts, or as because of minor feuds.

Gardaí are working with communities most threatened by knife crime, while they “pro-actively target public disorder and antisocial behaviour,” Minister for Justice Charlie Flanagan has previously said.

Some of the rise is explained by increased Garda numbers and more stop-and-search operations. Neither the Central Statistics Office nor the Garda collect statistics about knife crime.

Mr Flanagan has sought better knife crime statistics, though he said in January it is “clear that progress is being made” by the Garda and the CSO.

Last December, the CSO, which has previously said it had doubts about the credibility of Garda statistics, said “clear improvements” have been made in the way crimes are logged on the Garda Pulse system.

“While this is encouraging, it is also clear that there is more work to be done in this area and my department, in conjunction with the Policing Authority, will continue to monitor progress,” said the Minister.

Replying to Dáil questions, he said the Garda is working on a new national strategy to deal with assaults, including those involving knives. A draft is to be ready by July.