Feud taskforce ‘would base gardaí abroad if needed’ 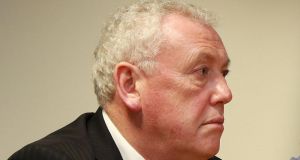 Garda Assistant Commissioner John O’Mahony said: “The reality of it is that we’re dealing with a huge, huge crime conglomerate, if you like; we’re not just dealing with Ireland.” File photograph: Nick Bradshaw

The new Garda taskforce established to tackle organised crime in the wake of the Kinahan-Hutch feud would base members in Spain or other jurisdictions if required, the Garda’s Assistant Commissioner John O’Mahony has said.

The fact some of those involved in the feud were based abroad represented “a challenge” to the Garda.

“The reality of it is that we’re dealing with a huge, huge crime conglomerate, if you like; we’re not just dealing with Ireland, ” he said.

Southern Spain where some of the Irish criminals are based is also home for members of crime syndicates from Russia and members of the Russian mafia and others.

The Irish authorities are competing with their counterparts from those other countries in seeking the Spanish gather enough evidence to prosecute homegrown criminals who had fled to Spain.

While Mr O’Mahony did not name the international drugs gang led from Spain by Dubliner Christy Kinahan, it is that group which is suspected of six of the seven feud murders in Ireland since Gary Hutch (34) was shot dead in Spain last September.

“You are dealing with different jurisdictions, different legislation and different priorities,” he said of the criminal justice systems in those foreign countries where some of the Irish gang members were living.

“It’s probably . . . an unintended consequence of the success of the Criminal Assets Bureau in the early days that people now have assets and feel they need to live abroad to avoid the reach of the bureau.”

However, this feature of Irish gangland crime was not new to the Garda as former gang leader John Gilligan was arrested in the UK and Brian Meehan, the only man serving life for the murder of Veronica Guerin in 1996, was arrested in the Netherlands and extradited back to Ireland.

“That’s something we will do again, we will follow those people who are guilty of these crimes or other organised crime activity in this country wherever it takes us to bring them back to justice here.

The Garda was working closely with police in Spain, the UK, the Netherlands and France, with Garda liaison officers posted there “to build up relationships, pass on information and to get things done”.

In the past “operational” Garda members, who investigate crime, had been sent abroad as part of the approach to dealing with Irish criminals.

“And if that is what’s required here, we will do the same,” he said.

“One of the considerations that will be given to the new taskforce is to work closer, and if necessary, to work in those countries.

“There is no doubt about it; what’s happening in this country and what’s impacting on our communities, particularly the inner city communities of Dublin, is being orchestrated from the south of Spain and Holland, indeed the UK. And if that’s what’s required, we will be going there.”

Mr O’Mahony was speaking at a media briefing in Dublin where progress in the investigations into feud-related activity was set out.

Since Friday, February 5th, when David Byrne (33), Crumlin, was shot dead at the Regency Hotel, Drumcondra, in the first Kinahan-Hutch feud murder in the Republic 23 people had been arrested.

About 100 searches had been carried out, 21 firearms seized and 7,000 lines of inquiry had been identified. About 2,600 statements had been taken and 2,500 high visibility checkpoints had been conducted.

The Criminal Assets Bureau was tracking the money and more arrests were anticipated, involving suspects based in Ireland and outside the jurisdiction.