Fennelly commission seeks accounts of any calls taped by gardaí 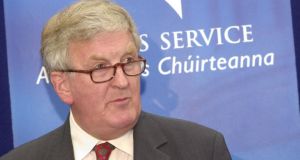 Mr Justice Nial Fennelly: his commission of investigation was established in April to examine covert recording of phone calls in some Garda stations between 1980 and November 2013. Photograph: Cyril Byrne/The Irish Times

The Fennelly commission is seeking information from solicitors on their experience of telephone recording at Garda stations. The commission of investigation, headed by Mr Justice Nial Fennelly, was established in April to examine covert recording of phone calls in some Garda stations between 1980 and November 2013.

It was set up after it emerged that phone calls were taped during an investigation into the still unsolved murder in 1996 of Sophie Toscan du Plantier and that there was a recording system used in some Garda stations.

The terms of reference of the commission include establishing whether any telephone conversations between solicitors and their clients were taped by the recording systems in Garda stations. It will also try to establish whether any information obtained was used improperly or unlawfully, particularly whether solicitor/client conversations were used for any purpose.

The Law Society had a meeting with the commission last week and in follow-up correspondence with its members, the society said that despite suggestions that the problem was “limited and isolated”, it was “a most serious matter”. It urged solicitors to provide assistance to the Fennelly commission.

The commission is seeking information from solicitors who had experience, whether in the form of evidence or suspicion, that a telephone conversation between them and a client was recorded. It would also like to hear from solicitors with experience of information known only to them and their clients coming into the possession of gardaí following a telephone conversation in a Garda station.

It has asked also anyone with awareness or concerns that telephone calls within Garda stations were not secure to make contact. The commission is expected to report to Government on its findings at the end of the year.

Separately, the Government has issued revised payments for solicitors who work in Garda stations following a Supreme Court judgment earlier this year, which means suspects will be entitled to have solicitors with them when they are questioned.

In the case of DPP v Gormley in March, the Supreme Court said: “The right to a trial in due course of law encompasses a right to have early access to a lawyer after arrest and the right not be interrogated without having had an opportunity to obtain such advice.”

A legal aid solicitor who attends when a client is being questioned will earn €72 an hour up to 8pm and €93 an hour from 8pm to 8am. The consultation fee will be €97 and €132 during unsocial hours. A telephone consultation will earn just under €40.