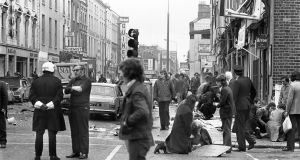 Members of the public tend to the injured following the detonation of a bomb on Talbot Street in Dublin in May 1974. Photograph: Tom Lawlor

Survivors and relatives of victims of the Dublin and Monaghan bombings are seeking full disclosure in a legal action over alleged British government collusion with loyalists behind the attack.

They have requested a High Court order for the Ministy of Defence, Northern Ireland secretary and PSNI to serve their defences to claims lodged two years ago. Nearly 20 of the actions were listed together for the first time at a preliminary stage in the High Court on Monday.

Solicitor Kevin Winters, of KRW Law, said outside court that the application was “significant because we cannot push for release of important materials until defences are filed”.

He said the legal process could be “terribly frustrating” for families bereaved during the Troubles and there was an obligation on all parties to try to expedite matters. “We anticipate the court putting in place a timetable for the next stages of the civil proceedings.”

President Higgins says British must face up to their history of reprisals 21:30
Rest of country can ‘transit’ through Dublin for overseas travel 21:14
Raab’s US visit amplifies Democratic support for Irish 21:06
Record number of Roseate Tern seabirds breed on Wexford island 20:59
Little sign of Culture Night 2020 business in Dublin’s Temple Bar 20:39

1 Coronavirus: From midnight Dublin will move to level three until October 10th - Taoiseach
2 Wife not entitled to deceased husband's entire estate, High Court rules
3 Life in Level 3: What will happen under new restrictions in Dublin?
4 Golf group insist they adhered to public health guidelines during Tullamore trip
5 Michael McDowell tells Seanad he has ‘no confidence’ in NPHET
Real news has value SUBSCRIBE