Extra 240 gardaí for Border region due to Brexit 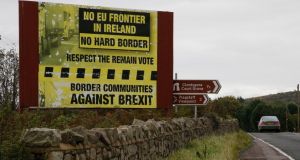 While most senior Garda officers do not expect any form of hard border, there is real concern that smuggling will boom after Brexit. Photograph: Nick Bradshaw

Almost 240 additional Garda members will have been deployed to the Border region by the end of next month, primarily to deal with any policing and security challenges posed by Brexit.

The bulk of the extra personnel have already been deployed over the past 12 to 18 months, with experienced Garda members transferred to the region and new recruits also deployed after passing out from the Garda College in Templemore, Co Tipperary.

The size of the deployment to the Border region emerges as new figures show a very significant discrepancy in the number of Garda recruits deployed to different parts of the country over the past five years.

Of the 28 Garda divisions, the six in Dublin have received 48 per cent of the 2,769 Garda recruits to pass out from Templemore since recruitment to the force recommenced five years ago. The remaining 22 divisions across the country shared the other 52 per cent of the recruits.

The highest number of recruits went to the Dublin Metropolitan Region (DMR) West, where 260 new recruits were deployed and the lowest numbers went to the Mayo division and the Roscommon-Longford division, which have both received 18 recruits in the period since the start of 2015.

Outside of Dublin, the Garda’s Louth division received more Garda recruits over the past five years than any other; a total of 136 personnel. The division is on the Border and has also seen a volatile gangland feud in Drogheda worsen since it began in July 2018.

In reply to queries from The Irish Times, Garda Headquarters said the arrival of new recruits in a division often facilitated the transfer of experienced gardaí out of that division to other parts of the country or into specialist units.

“A significant percentage of recruits assigned to the Dublin region was in response to backfill vacancies which developed following the expansion of Garda specialist units over recent years such as the drugs and organised crime bureau and regional armed support units,” Garda Headquarters said.

“Garda management closely monitors the allocation of all resources, in the context of crime trends, policing needs and other operational strategies . . . to ensure optimum use is made of Garda resources.”

While the deployment of new recruits around the country is closely watched, especially by local politicians, a major risk for the Garda in the months and even years ahead relates to the Border.

Garda Commissioner Drew Harris has said the policing demands that arise from Brexit will not become clear until the manner of the United Kingdom’s departure from the European Union is settled.

Gardaí believe any border infrastructure, or personnel working on any new border-related tasks, would be regarded by dissident republicans as legitimate targets for attack, creating a very challenging security climate.

However, while most senior Garda officers do not expect any form of hard border, there is real concern that smuggling will boom after Brexit.

Garda sources said the weakening British pound has already made smuggling some goods more attractive. They added that new VAT and related arrangements after Brexit may also make smuggling goods across the Border much more lucrative.

Along the Border the net increase in Garda personnel has reached 190, the vast majority in the past 18 months. The extra personnel include experienced Garda members of garda, sergeant and inspector ranks, as well as new recruits. Another 45 recruits will be deployed to the Border region next month when the last class of 2019 passes out from Templemore.

All of the information about Garda recruits and Border deployments relates to the Garda force in its 28-division configuration, which is in the process of being reduced to 19 divisions.