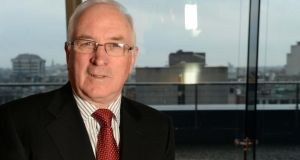 In the course of their evaluation of the Smithwick report, John O’Brien and fellow former Garda officers Michael Finnegan and Michael Staunton claim there was no direct evidence of collusion. Photograph: Eric Luke / The Irish Times

The Smithwick Tribunal was wrong to attach significance to CB radio traffic in the Dundalk Border area on the day two RUC officers were killed by the IRA.

That is the view of John O’Brien, one of the three former Garda chief superintendents who yesterday called for the Government to reject the tribunal’s conclusion that someone inside Dundalk Garda station tipped off the IRA about the visit.

RUC Chief Supt Harry Breen and Supt Bob Buchanan were shot dead in an IRA ambush in south Armagh on March 20th, 1989, minutes after they left a meeting with senior gardaí in Dundalk station.

Last month, after an eight- year inquiry, the Smithwick Tribunal found there had been collusion between the IRA and somebody inside the station who tipped off the IRA about the intended visit, before the RUC officers had arrived.

Border
The tribunal report attached significance to evidence from British army Brigadier Ian Lisles who revealed coded CB radio traffic had been detected in the Dundalk Border area after Supt Buchanan had telephoned the Garda station to arrange the meeting, but before the two officers had crossed the Border into the South.

The CB radio traffic which consisted of “gush” and a series of clicks and bangs and sounds like doors closing, was the hallmark of an IRA unit mobilising, the tribunal was told. However, Mr O’Brien and his fellow former officers who all served significant parts of their careers in senior positions in the Border area said the evidence before the tribunal pointed instead to a longer-term plan to target Supt Buchanan’s red Vauxhall car which had been seen frequently in the Border area and was known to be driven by an RUC officer.

Mr O’Brien said that the evidence pointed instead to the IRA mobilising in the area on a routine basis to catch the car.

‘No clarity’
Speaking to The Irish Times yesterday Mr O’Brien said there was “no clarity about the alleged CB or electronic activity, because we can’t verify it in any way, so that is a big problem”.

Mr O’Brien said: “It was reported there was an increase in CB activity between 11.30 and 12 on that day . . . Judge Smithwick makes some play that this is a significant matter in relation to the event, but he does not have sight of, nor has anyone provided him with, the contents of that traffic.

“So we are left speculating as to whether this had anything to do with the murder or was it simply coincidental. As a matter of fact, we don’t know for a fact that it actually occurred because we have no record of it.”

Mr O’Brien also said the IRA had told the tribunal it did not use CB radios until very close to the ambush which happened after 3pm.

Untested
In the course of their 33-page evaluation of the Smithwick report, Mr O’Brien and fellow former Garda officers Michael Finnegan and Michael Staunton claim there was no direct evidence of collusion. They said material provided by PSNI Assistant Chief Constable Drew Harris, that as yet unnamed gardaí colluded in the killings, was accepted untested.

Mr O’Brien said the three former colleagues were calling on the Government to “walk in our footsteps and examine the tribunal report”.

He said he believed a reappraisal of the tribunal report could only lead to its rejection.

There was, he said “no credible, verifiable evidence that supports tribunal chairman Judge Peter Smithwick’s theory that there was collusion involved in the killings”.