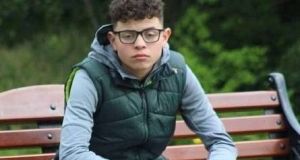 A male teenager presented himself to gardaí on Saturday after an 18-year-old man was stabbed to death in a park in south Dublin on Friday evening.

A spokesman for the Garda said the teenager was assisting detectives with their inquiries.

Gardaí began a murder investigation following an attack at Finsbury Park, Dundrum, at about 8.10pm.

The teenager who was killed has been named locally as Azzam Raguragui. Gardaí said Mr Raguragui received “an apparent stab wound”.

Mr Raguragui was treated at the scene by emergency services and then taken to St James’s Hospital, where he was pronounced dead a short time later.

A postmortem is being carried out by Deputy State Pathologist Dr Linda Mulligan.

Mr Raguragui was Irish and lived in Dundrum, but is believed to have been of north African descent. Detectives do not believe the attack was racially motivated.

It’s understood gardaí are following a definite line of inquiry. Detectives believe Mr Raguragui was part of a group of youths in the park when a row broke out with another group, and he was then stabbed.

A Garda source said there had been a good response from the public to an appeal for information in relation to the murder.

A Muslim organisation called the Irish Sufi Foundation said Mr Raguragui was “a kind, courteous, respectful and cheerful young man who always had a smile on his face”.

“He was bright, talented and ambitious with aspirations to become a successful entrepreneur,” it added in a statement.

It’s understood family and friends will attend a gathering with lanterns and balloons for Mr Raguragui at the football pitches in Dundrum on Sunday.

A Garda technical examination of the scene took place on Saturday and the location remains sealed off.

Detectives could be seen scouring the park for evidence throughout Saturday morning, sometimes stopping to take photographs. The sewers were also searched. However, the murder weapon has not been recovered.

A school and astroturf playing pitches are located yards from the scene of the stabbing, and children were playing football there the morning afterwards.

At one point, a woman approached gardaí at the cordon of the scene, offering to provide them with footage from a CCTV camera outside her home.

One of the few passersby this morning noted it was “normally quite a busy area”, frequented by dog walkers.

Another man approached gardaí and described seeing a group of least 10 youths in a nearby shop on Friday night.

He said it was an “international group”. He described their demeanour as “preoccupied” before leaving the premises “in a hurry”.

A woman living on the estate said there had been a group of young people gathering close to the scene over the past fortnight who she had not seen in the area previously.

“They didn’t seem like the kids around here. My sense was that they weren’t local but I don’t know.

“We felt a bit exposed so we tried to keep the heads down but the police were up numerous occasions over the past couple of weeks talking to them, so they must have taken names.”

A woman tending her front garden said trees and hedgerows in the park concealed the area where the stabbing had taken place. She said this had made it an attractive location for antisocial behaviour.

“I lived in America where they make sure the hedges are trimmed at least four feet off the ground, so that it’s clear underneath and there’s nowhere to hide,” she said.

“There are loads of places to hide in there. They cut the grass but they don’t cut the trees to make it clear.

“We have a community policeman, but I’ve only seen him once this year. Now, I don’t blame the police. They haven’t got the resources, but maybe we should go back to having park wardens just cruising the area on bikes.”

One man who lives on a nearby road said he had heard about the stabbing on the news. “We go through there every night and there are always young people hanging around,” he said.

“It’s that area in behind the trees there. The area is great otherwise. There is never any trouble around here. If it’s a nice night you’d see young fellas drinking in the field, but nothing serious. You know yourself, young people these days with the knives. It’s crazy.

“It’s very quiet around here though. I’ve been living here all my life and it’s the first incident I’ve ever seen.”