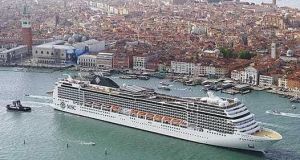 The cruise ship MSC Magnifica on which Dublin-based German Daniel Belling, who is accused of killing his wife, was travelling. Photograph: MSC Cruises

A Dublin-based man from Germany will be formally charged in a Rome court on Friday with the murder of his Chinese wife.

Daniel Belling’s wife Li Yinglei went missing during a 10-day Mediterranean cruise which started and ended in the port of Civitavecchia, north of Rome.

Mr Belling (46) and the couple’s two children, a six-year-old boy and a four-year-old girl, disembarked from the MSC Magnifica on Monday after it anchored in Civitavecchia.

However, the ship’s crew noticed a discrepancy in the number of passengers alighting compared with the number registered as being aboard.

On further examination, the crew confirmed Ms Yinglei (36) had boarded on February 10th but had not disembarked 10 days later.

None of crew could confirm they had seen her in recent days.

Police detained Mr Belling at Rome’s Ciampino airport , where he was about to board a flight to Dublin with the two children.

Mr Belling was arrested and taken to Rome’s Regina Coeli prison, where he is due to be charged on Friday, according to his lawyer Luigi Conti.

It is understood the police have also spoken to the couple’s children.

Mr Conti said Mr Belling is a German citizen based in Dublin, where he works as an IT consultant.

Mr Conti said his client was anxious to have a court hearing, which would offer him a chance to explain his wife’s disappearance to a judge.

The Irish consulate in Rome confirmed it was aware of the case, but said that since Mr Belling is a German citizen, it is not currently involved in the court proceedings.