Drew Harris’s big plan: A guide to the radical shake-up of An Garda Síochána 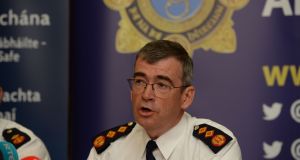 The most radical shake-up of An Garda Síochána in its near 100-year history will see power decentralised from Garda Headquarters in Dublin to chief superintendents who will run Garda divisions nationwide.

Each chief superintendent in the 19 new divisions becomes the de facto garda commissioner for his or her division. And he or she will run that divisions as a mini police force.

Garda Commissioner Drew Harris held a press conference on Thursday morning in Dublin to unveil his plans, which can be broken down under key headings.

The current six Garda regions are the Dublin Metropolitan Region, West, South, South East, East and North. These will be rearranged into four divisions.

The Dublin Metropolitan Region remains unchanged while the North-West, South-West and East regions are created. This process begins from Monday.

The 28 divisions currently within those regions will be amalgamated to create the 19 new divisions. These will then become what garda sources are calling “mini autonomous police forces”, each led by a chief superintendent devising policing that is tailor-made for the area he or she commands.

In the East, Meath and Westmeath are merging; so too are Laois-Offaly and Kildare. Wicklow and Wexford also merge, as do Kilkenny/Carlow and Waterford.

In the South-West, Kerry, Limerick and Cork city all remain as they were, while Cork North and Cork West merge, as do Tipperary and Clare.

In the North/West, Galway stays as is, while Mayo merges with Roscommon/Longford; Donegal merges with Sligo-Leitrim and Cavan/Monaghan merges with Louth.

The Dublin divisions all remain as they were.

A key role for the two superintendents responsible for community engagement will be to constantly speak with community leaders and organisations to spot crime trends early. This will help ensure local policing plans are in line with the on-the-ground reality of the local community.

Each chief superintendent can then set a bespoke policing plan, and allocate resources accordingly, based on the needs of his or her area. Local chief superintendent will have that autonomy because, under the new system, Garda headquarters in Dublin is devolving that power to them. Local people should get a better sense that the specific needs of their area is being catered for by local gardaí, rather than one-size-fits-all policing objectives being imposed from Dublin.

Mr Harris takes the view that having 28 Garda divisions weakens policing in each division. For example, small numbers of detectives in a division with an expertise in the investigation of sex crimes constantly get pulled into other crime investigations.

Under Mr Harris’s plan, when two divisions are amalgamated the gardaí with the expertise in investigating sex crimes will become a dedicated sex crime unit within the enlarged division. And for the first time ever, they will only investigate sex crimes. This means they should become more effective over time, offering a better service to victims and solving more crimes.

It is intended to replicate this across the investigation of all crime types, with specialist teams focussed on specific crime types delivering a better service to victims.

At present there are 124 administrative offices around the country offering support to the Garda officers in senior positions in the regions, divisions and districts. Most of these 124 small teams of staff are sworn gardaí, working in offices.

Under Mr Harris’s plan, there will be just 19 offices, one for each Garda division. These will be staffed by civilians, under an assistant principal officer, and they will manage human resources, expenditure, procurement, sick and annual leave, personnel transfers and so on.

The civilians hired into these posts will have relevant training and expertise and they will unburden Garda members of the need to carry out these administrative tasks. This should have the effect of freeing up gardaí from behind desks, allowing them to return to the frontline.

It should also ensure the “business services” office in each of the 19 divisions, which will run the working lives of about 800 personnel in each division, will be more professional.

More gardaí on the streets

As well as gardaí in the 124 administrative offices being freed up for frontline duties, the Garda is also recruiting at an accelerated rate. It will reach 15,000 sworn members – a new record – within two years.

The net result of civilians displacing gardaí from administrative posts combined with the recruitment programme, will be an additional 1,800 gardaí being posted onto frontline duties – on the beat and investigating crime – over the next 24 months.

Mr Harris has said these extra numbers mean all areas of the country will get a much better police service, and one that is more visible on the streets, under the reorganisation of the force. The bringing together of two divisions in Cork city, for example, resulted in the community policing capacity for the geographic area being doubled to 440 personnel.

As well as the additional 1,800 gardaí on frontline duties, 75 new inspectors are being appointed and 150 new sergeants are also being put in place. This is aimed at ensuring the larger number of rank-and-file gardaí who will be on the beat and investigating crimes will be properly supervised.

Instead of superintendents running most Garda stations, inspectors will now run them. It appears inevitable that a very small number of chief superintendents posts will be lost in the reorganisation, though sources say that will be minimal. However, the loss of a much larger number of posts at superintendent level looks certain. It will mean fewer very senior officers and far more rank-and-file gardaí, sergeants and inspectors.

The senior officers who remain will have more power and more resources to focus on the specific challenges emerging in the areas they are responsible for.