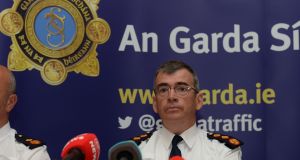 Garda Commissioner Drew Harris has been a lucky general in his first year in office but he is not out of the woods yet. Photograph: Alan Betson

The biggest selling point of Garda Commissioner Drew Harris’s plan to reform the Garda is, without question, the deployment of 1,800 additional Garda members to the front line over the next two years.

Harris has been a lucky general in his first year in office and his luck has continued into the launching of his new operational policing plan.

Coverage of his plans has been dominated by the 1,800 extra gardaí set to be dispatched onto the front line, though really most of that deployment is completely independent of his plan.

The Government decided long ago, before Mr Harris joined the Garda last September, that recruitment in the force would be accelerated. Some 800 of 1,800 front-line-bound personnel are new recruits who were always going to be hired for dispatch to the front line irrespective of Mr Harris’s plan.

The remaining 1,000 personnel arise because civilianisation, another process that predates Mr Harris’s time in the Garda, will displace desk-bound gardaí and free them up for the front line.

It is hard to imagine Mr Harris’s predecessor, Nóirín O’Sullivan, getting away with packaging 1,800 additional Garda personnel as a new reform when it had been in the pipeline for so long.

But therein lies Harris’s biggest asset; he is an outsider brought in from the Police Service of Northern Ireland (PSNI). Garda insiders say he puts little store in making friends and is, instead, determined to carry out the reforms he was hired to implement.

He is not part of any clique and does not seem remotely concerned about ruffling the feathers of any of the personnel he commands. On Thursday he dismissed the suggestion he had failed to consult the Garda staff associations on his plans.

On the contrary, he said some of the ideas were first mooted four or five years ago and had been discussed again in recent months. He said there had been enough conversations, adding the moment for implementation had arrived.

His plan to reduce 28 Garda divisions around the country to 19, where chief superintendents will effectively run their own police forces, is a radical one. It is a release of power from Garda headquarters in Dublin to the senior officers around the country; not exactly the kind of giveaway Garda HQ has been known for down the decades.

For now, however, his plan is just that; a plan. Far from being out of the woods, he has only just entered them.

The trickiest argument against the reforms has been the claim that, in the enlarged Garda districts, policing resources will be pulled to the busiest locations while quieter – that is, rural – areas will endure diminished police cover.

A perception that rural Ireland is being abandoned can become frenzied quickly, especially when it is without foundation. Large tracts of rural Ireland have convinced themselves they had been enduring a crime epidemic for years, though the statistics say crime rates are falling.

That fear in rural Ireland will be stoked by vote-hungry TDs who have already raised concerns that their local Garda stations will lose their status as divisional headquarters under the new plan.

Mr Harris is meeting Garda members all next week about his plans. But it is really rural communities, many of which are very willing to believe the abandonment lie, that he needs to convince.