DPP will not call Tánaiste as witness in water protest trials

Summonses, including for false imprisonment of Joan Burton, being sent to suspects 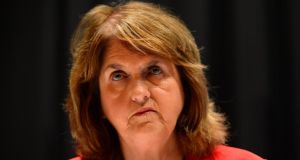 Tánaiste Joan Burton: will not be called as witness in trials over anti-water protest where she was allegedly falsely imprisoned. Photograph: Dara Mac Dónaill

The Director of Public Prosecutions has ruled out calling Tánaiste Joan Burton as a witness for the State in the trials of suspects facing charges over her alleged false imprisonment at an anti-water charge protest last year.

The Irish Times understands statements have been taken from up to 100 members of the Garda and that the prosecutions will be based on the statements and video evidence.

Some of the footage to be used by the DPP was recorded by the protesters and published online.

Summonses are currently being sent to 27 suspects, instructing them to appear before the courts, negating the need to arrest them and create any flashpoint situations.

Informed sources said it was unlikely any trials would take place before the general election, which are due within the next six months.

As well as the alleged false imprisonment of Ms Burton and her assistant Karen O’Connell last November 15th, a charge that 14 suspects will face, other suspects are to be charged with violent disorder and criminal damage.

Paul Murphy TD of the Anti-Austerity Alliance has already said he expects to be charge with false imprisonment.

He denies anybody was falsely imprisoned and said the incident on Fortunestown Road, Jobstown, west Dublin, was a protest rather than any form of criminal conduct.

He has said the investigations and anticipated prosecutions arise from political policing.

It is also anticipated that two councillors from the Anti-Austerity Alliance, Kieran McMahon and Mick Murphy, will face false imprisonment charges.

A senior figure in Sinn Féin in Dublin is also expected to be criminally charged.

The summonses being sent to the suspects will direct them to appear at specific Dublin District Court sessions.

However, the trials will take place before the Circuit Criminal Court, where juries are used and where penalties upon conviction, including jail terms, are more severe. Some of the suspects facing charges are juveniles and a number of people face multiple charges.

A conviction for false imprisonment would almost always lead to a jail sentence, with the maximum a life term.

Ms Burton and Ms O’Connell were trapped in their car for a number of hours when protesters surrounded the vehicle and staged a sit-down protest as the Tánaiste tried to leave a graduation ceremony at An Cosán College, Jobstown.

The arrival of a large number of gardaí to the scene failed to disperse the protesters.

When Ms Burton was taken from the car being blocked and walked to another vehicle by gardaí, a number of missiles were thrown at her.

She was hit on the head by a water balloon. Other objects, including bricks, where thrown at gardaí and their vehicles.

A number of gardaí who moved in to surround Ms Burton’s car had items of equipment and uniform stolen.