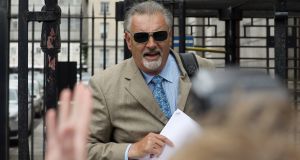 Ian Bailey leaving the Four Courts on Wednesday after the Court of Appeal delivered its judgment. Photograph: Collins Courts

The Court of Appeal has not closed the door on Ian Bailey’s pursuit of gardaí and the State over the conduct of the investigation into the brutal murder of Sophie Toscan du Plantier.

While it dismissed the appeal on all but what the court described as “one minor respect”, that still allows Mr Bailey to bring a fresh case alleging unlawful conspiracy by gardaí and breach of his constitutional right to privacy.

At issue is his claim gardaí unlawfully disclosed confidential information – statements of key witness Marie Farrell – to media solicitors for use in his libel actions against some media in late 2003. He won two of those actions and lost five but, on appeal, those five were settled on confidential terms believed to include a payment.

“This case was dead, it wasn’t even on life support, but the appeal court judgment resuscitated it,” according to a legal source.

The opening of the door to a fresh case also has implications for liability for costs of the 64-day High Court case, the longest-running civil action in the history of the State. The costs have been estimated at between €2 million and €5 million and Mr Bailey was previously ordered to pay all of those, subject to the outcome of his appeal.

Mr Bailey appeared quite upbeat after the judgment. While “obviously disappointed” the appeal court did not find for him on wider grounds, told The Irish Times he was “delighted” it had given him a right to pursue his case.

It is also open to Mr Bailey, and to the State, to apply to the Supreme Court for permission to appeal over the Court of Appeal decision.

Any such appeal can only be brought if it raises issues of “general public importance” or is considered “necessary in the interests of justice”, and legal sources believe the judgment falls into at least one, if not both, of those categories.

The judgment addressed issues concerning the entitlement to raise, and succeed on, the statue of limitations point at such a late stage of the 64-day case.

In the particular circumstances and the nature of the “overarching conspiracy” alleged by Mr Bailey, the appeal court held it was not unfair to allow the State defendants do that.

It rejected the State’s argument that Mr Bailey’s allegation that three gardaí conspired to frame Mr Bailey for murder was also statute barred and should not have been let go to the jury.

Other issues concerned the admissibility of opinion evidence from former DPPs Eamonn Barnes and James Hamilton, along with that of Robert Sheehan, a solicitor in the DPP’s office who dealt with the Garda investigation file.

All three were critical of the Garda investigation, and the appeal court held their evidence was precisely the type of opinion evidence the Supreme Court had made clear cannot be provided, and upheld the trial judge’s ruling not to admit it.

The trial judge’s warning about perjury to Marie Farrell, made in front of the jury and during her sometimes sensational evidence, was among the more controversial aspects of the trial.

For reasons including she was a key witness who had admitted previously giving perjured evidence and her “dramatic” departure from the witness box, the appeal court dismissed that ground.

A judge should be “slow” to warn a witness about the credibility of their evidence but this was sometimes necessary and, if there was ever a case where such a warning was necessary, “it was probably in the case of Ms Farrell”, it said.

1 Why Sinn Féin will not call the State by its name
2 Spread of coronavirus triggers European travel curbs
3 Anti-social chants bringing sour note to schools rugby
4 Martin and Varadkar to hold exploratory talks on possible coalition
5 What evidence is there that the IRA still controls Sinn Féin?
Real news has value SUBSCRIBE