Armed officers arrived at scene in Priorswood after shots fired 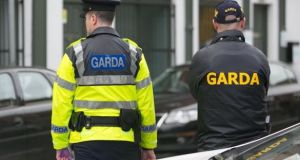 Gardaí are investigating the shooting dead of a dog in north Dublin in the early hours of this morning.

The incident occured at about 1am at Moatview Avenue in Priorswood. Gardaí, including armed officers, arrived at the scene having received reports of shots fired.

They discovered a number of shots had been fired into the rear of the house on Moatview Avenue.

The owners of the house were present and uninjured but their dog was found shot dead in the back garden.