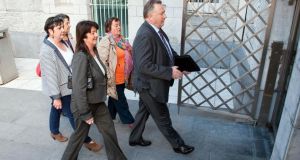 The desperate crew of the ill-fated Tit Bonhomme made two 999 emergency calls after the first call operator failed to gather that they were aboard a sinking trawler and transferred the call to gardaí in west Cork, the inquest heard.

There were emotional scenes yesterday after survivor Abdelbaky Mohamed told how Kevin Kershaw had twice rung 999 on his mobile phone when the boat’s VHF radio did not work.

Recordings of the two 999 calls were played for the jury.

Supt Colm O’Sullivan said the first 999 call was made at 5.46am and was received by private contractor ECAS at its call centre in Ballyshannon, Co Donegal, while the second call was made at 5.49am to an operator in Dublin, who transfers it to the Irish Coast Guard.

The operator asks what part of Cork they are in, before Mr Hayes comes on the phone and says “yes, we’re at, helicopter please, we’re after hitting the island off – going into Union Hall – boat is aground, the vessel, oh s**t, is the Tit Bonhomme , please hurry”.

Phone mast
The call operator then rings Bandon Garda station after tracing the call to a phone mast in west Cork, before informing Garda John O’Neill that there had been no direct service request or location confirmed.

Garda O’Neill is put on the line to the crew but can get no details. The operator then tells Garda O’Neill: “They didn’t make a direct service request but you could hear them in the background, shouting – my line was distorted but it sounded like, it could, it sounded like helicopter but I’m not sure.”

Mr Kershaw rings 999 a second time at 5.49am and is put through to an emergency operator based in Dublin. He and Mr Hayes can again be heard desperately asking for a helicopter as they explain that the boat is filling with water during the three-minute two-second call.

“We need a boat, we need a helicopter . . . We’re sinking, we’re going under water,” says Mr Kershaw, with Mr Hayes shouting in the background that they are at “the island off Union Hall for f***’s sake” before the operator transfers the call to the Irish Coast Guard at Valentia.

‘Not a scintilla’
Barrister Elizabeth O’Connell, for Mr Hayes’s widow Caitlin Ui hAodha, asked Garda O’Neill to confirm “not a scintilla of information was picked up by the operator and not a scintilla was passed on to you”. When he agreed, Ms O’Connell remarked it was “extraordinary”.