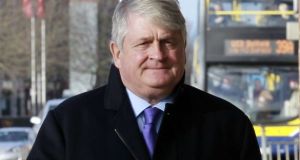 Businessman Denis O’Brien has lodged an appeal in the case he took against the Dáil, the Dáil Committee on Procedures and Privileges and the State over comments made in the parliament about his financial affairs.

In dismissing the High Court case earlier this year, Ms Justice Úna Ní Raifeartaigh said what Mr O’Brien had sought was prohibited by the separation of powers under the Constitution, was “very far-reaching”, and would have a “chilling effect” on parliamentary speech in the future had it been successful.

Papers lodged with the courts indicate he is taking his case to the Court of Appeal. However, it is understood he will also seek to have his case go directly to the Supreme Court on the basis that it involves important constitutional issues.

As part of his appeal he will be seeking to overturn the High Court’s ruling that he pay the legal costs of the seven-day hearing.

Mr O’Brien complained of comments made in the Dáil by Social Democrats TD Catherine Murphy and Sinn Féin TD Pearse Doherty about matters to do with his banking affairs, the publication of which had been prevented by a High Court order granted to him earlier against RTÉ.

The businessman also complained about how the Dáil Committee on Procedures and Privileges, which oversees the rules of the Dáil, dealt with his complaint about what the deputies had done.

In her judgment, Ms Ní Raifeartaigh said that irrespective of the court proceedings or how damaging what Ms Murphy and Ms Doherty said was, Article 15 of the Constitution conferred immunity from legal proceedings both on “utterances” made in the Dáil and on the member who makes them.

She took this view with her “eyes wide open” to the fact that what the TDs said rendered Mr O’Brien’s case against RTÉ, concerning disclosure of his banking relationship with IBRC, “almost entirely” pointless.

In his action, Mr O’Brien alleged that Ms Murphy and Mr Doherty “clearly disregarded” the constitutional separation of powers between parliament and the courts when they respectively made statements in the Dáil in May and June 2015.

The statements, made after Mr O’Brien took proceedings against RTÉ in April 2015 to stop it publishing details of his banking relationship with State-owned IBRC, amounted to “unwarranted interference” in the judicial domain, he claimed.