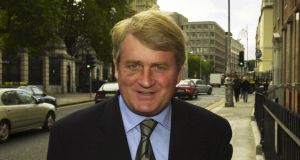 Reporting restrictions have been granted by the High Court in relation to an injunction application by Denis O’Brien against RTÉ.

Mr Justice Donald Binchy granted an order sought by Mr O’Brien restricting reporting, until the case is finished, of the precise details of his banking arrangements with IBRC, which he is trying to prevent RTE broadcasting.

Lawyers for The Irish Times addressed the court, and asked that a “mechanism” be provided whereby its reporters get access to redacted versions of the affidavits in the case, so that they did not inadvertently breach the order.

This morning Mr O’Brien’s counsel, Michael Cush, told the court that if the media were free to report all matters on the case, Mr O’Brien’s case would be set at “nought” because it would mean opening before the court the information at issue.

His side had sought this restriction even before RTÉ had replied to the original affidavits submitted on behalf of Mr O’Brien, counsel said.

Mr O’Brien is attempting to prevent RTÉ from broadcasting a news report in relation to his banking relationship with IBRC (which is now liquidation).

Mr O’Brien is alleging the story is a breach of his privacy.

The State-owned bank IBRC today joined Mr O’Brien in making an injunction application against RTÉ over the story.

David Holland SC, for RTÉ, said they could not consent to anything which would inhibit ordinary reporting of the courts given his client’s public role.

Asked by the judge did he agree that without restricted reporting it would set Mr O’Brien’s application at nought, Mr Holland said he could see the force of that argument.

RTÉ had taken the initiative to ensure the information did not get into the public domain and that affidavits, which were exchanged this morning, would not be filed but they could not consent to a reporting restriction, counsel said.

There was not just the issue of RTÉ’s private interest here but of the broad public interest, he added.