Defence Forces at ‘crisis’ point as numbers fall below 8,500 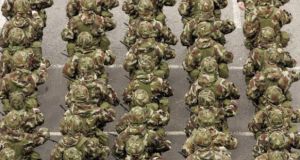 Numbers are supposed to be maintained at a minimum of 9,500 serving personnel, excluding several hundred recruits in training at any one time. File photograph: Alan Betson

Numbers in the Defence Forces have continued to fall despite recent recruitment campaigns, with many personnel now concerned the situation is beyond rescue based on the Government’s current approach.

The full strength of the Army, Naval Service and Air Corps combined should be a minimum of 9,500 personnel but has now fallen below 8,500; the lowest point since numbers were increased in the 1970s in response to The Troubles erupting.

1 Teenage boy dies at Powerscourt Waterfall in Co Wicklow
2 Fresh investigation into the murder of Michaela McAreavey in Mauritius
3 ‘There were times I had to step outside to hide my tears, take deep breaths and then carry on’
4 Coronavirus: 50 new cases as Glynn says phase four delay disappointing for many
5 John Hume’s socially distanced send-off a fitting end to the life of a ‘great servant’
6 Italy threatens Ryanair with flight ban for alleged Covid-19 violations
7 ‘I wandered around Dublin wondering: Is this what they call a capital city?’
8 In Oz, Marianne would have told Connell: ‘Get stuffed, you gutless wonder’
9 Harlots? It’s all pumping buttocks from the men. Which is fair enough
10 Students to wear face coverings in lectures where two metre distance not possible
11 ‘Pat Hume did so much...Derry people know that, and remember that’
12 ‘My mother is a controlling, manipulative, narcissistic person'
13 Funeral of John Hume hears peacemaker ‘gave dignity and life to so many people’
14 ‘This was like a nuclear bomb’: More than 2,700 injured in Beirut explosion
15 Beirut explosion: At least 135 killed as port officials put under house arrest
16 Gardaí surrender 13 people to Polish police
17 Irishman in Malta not surprised by green list change
18 Boy’s treatment by school over alleged thefts was ‘unbelievable’, judge says
19 The breaking point in Belarus has been made flesh in Svetlana Tikhanovsky
20 Owens’s comments increase tensions ahead of FAI senior council meeting
21 Five of the best foundations to try as the world comes back to life
22 Gardaí find potential breaches of Covid-19 rules in 24 pubs
23 NPHET calls for ban on non-essential travel from countries with high Covid-19 rates
24 Ireland needs to move to ‘zero-Covid’ policy to avoid catastrophe, scientists say
25 Donohoe does not commit to specific compensation for pubs
26 Ford Kuga: Impressive plug-in hybrid SUV underlines motor giant’s renaissance
27 Shock explosion in Beirut shows how the unpredictable will challenge Europe
28 Publicans ‘devastated’ that pubs will not open on August 10th
29 ‘I’m lucky to be alive’: Irish citizens describe Beirut explosion
30 Shannon campaigners demand board stands down
31 Restaurateurs say new 11pm closing time is ‘a body blow’ to sector
32 When Covid subsided, Israel reopened its schools. It didn’t go well
33 Hume brought to Derry as candles in windows light his way
34 ‘John Hume came out for us that often, Derry needed to come out for him’
35 BofI to cut 1,400 jobs as Covid-19 drives €937m loans charge
36 Ryanair and State agree accelerated hearing of challenge to travel restrictions
37 Court says Land Rover shape can’t be trademarked
38 Dignitaries send tributes to Hume funeral from around the world
39 Newly-appointed Junior Ministers will not get special advisers
40 John Hume obituary: Nationalist leader who championed ‘agreed Ireland’
Real news has value SUBSCRIBE