Dún Laoghaire vendor can sell newspapers ‘for rest of life’ 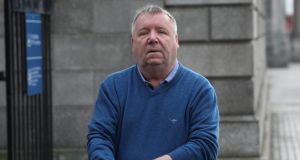 George Davis has been selling newspapers around the shopping centre and other areas of Dún Laoghaire for almost 40 years. Photograph: Collins

Dún Laoghaire news vendor George Davis may sell newspapers at the entrance to the Co Dublin town’s main shopping centre for the rest of his life, a court has ruled.

Judge Francis Comerford said Mr Davis could operate on the tiled area between the centre’s public footpath and the side doors.

The judge told barrister Mark O’Riordan BL, counsel for Mr Davis, that the centre’s owner Coltard was bound by way of a constructive trust which allowed him to continue his operation.

Barrister Raymond Delahunt told the court Mr Davis at best only had a licence to sell papers that could be revoked at any time.

Mr Davis’s barrister claimed that, in the 1970s, during legal proceedings involving the previous owners of the centre, a compromise had been reached allowing Davis a life-long contract to sell papers.

Coltard plans a €10 million redevelopment of the centre.