Covid-19: Large spike in use of spit hoods by gardaí in past week 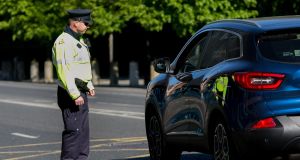 The use of spit hoods by the Garda has increased almost 70 per cent in the past week, according to new figures on the force’s enforcement of Covid-19 restrictions.

There were also a further 53 incidents of enforcement of the emergency movement restrictions last week – a 38 per cent increase on the total number.

Since the emergency regulations came into force on April 8th, gardaí have initiated enforcement proceedings against 192 individuals who were found in breach of the movement restrictions and refused to comply with garda directions to abide by them.

This was out of “the hundreds and thousands of interactions” with the public, the Garda said.

Some of these cases resulted in the person being arrested. In other cases, the person’s name and address was taken and a case referred to the Director of Public Prosecutions (DPP).

Gardaí have also made arrests or initiated prosecutions in 1,432 incidents where non-Covid-19 offences were detected in the course of public health enforcement, up from 1,172 the previous week.

“These range from incidents such as drink driving or disqualified drivers detected at checkpoints, to drugs and weapons seizures to public order offences,” a Garda spokesman said.

According to the latest weekly figures, which cover the period up to last Saturday, gardaí have been deliberately spitted or coughed at on 64 occasions since the start of April.

They have used spit hoods – wire and mesh face coverings which are secured over prisoners’ heads – 47 times, including 19 times in the past week.

“Unfortunately, we continue to see these disgusting and despicable spitting and coughing attacks on our personnel,” Commissioner Drew Harris said. “These are a significant health and safety risk to our members in the current environment. We must protect them from such attacks.

“This includes having the option of using anti-spit guards in very limited circumstances. We have made it clear these anti-spit guards are to be used only as last resort and in line with the Garda Decision Making Model, which includes at its centre human rights and our code of ethics.”

The Garda has said the spit hoods will be deployed only for the duration of the health crisis and their use will be reviewed in September. The Policing Authority and the Irish Council for Civil Liberties have previously expressed concern about their use.

The Garda said overall compliance with the movement restrictions continued to be very high and the “vast majority” of people were adhering to the rules.

“We thank the public for the continued high level of compliance with the health guidelines. Working together, we can reduce the spread of Covid-19 to help protect our family, friends, neighbours and colleagues,” Mr Harris said.

“At the outset of the Covid-19 situation, I said that An Garda Síochána would continue to operate as a community-based policing service with a focus on protecting the vulnerable. This approach will not change.

“Recent independent surveys show very high levels of public satisfaction with how An Garda Síochána is operating in this challenging situation. This is testament to the work being done by Garda personnel across the country in difficult circumstances.”

The Garda National Vetting Bureau has now processed 21,542 vetting applications for Covid-19-related roles, mostly in the health system. The bureau said it was now fully up to date with its workload and that applications were being turned around in a day.