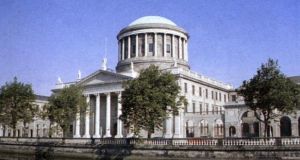 The Supreme Court has declared unconstitutional a law requiring that a mandatory five year minimum sentence be imposed on some persons convicted under a section of the Firearms Act.

The Supreme Court has declared unconstitutional a law requiring that a mandatory five year minimum sentence be imposed on some persons convicted under a section of the Firearms Act.

The consequences of that finding for Wayne Ellis, jailed for five years in 2017 after the DPP successfully appealed as unduly lenient a trial judge’s earlier decision to suspend a five year sentence, will be decided later by the Court of Appeal.

On Wednesday, a five judge Supreme Court unanimously ruled that, in enacting Section 27A(8) of the Firearms Act 1964, the Oireachtas “impermissibly crossed the divide” between the constitutional separation of powers because it sought to decide the minimum sentence to be imposed by the court on some, but not all, persons convicted of listed offences.

On that basis, it granted a declaration of unconstitutionality to Mr Ellis, with an address at Landen Road, Ballyfermot.

He was given a five year suspended sentence in 2014 for an offence under Section 27A (1) of the Firearms Act 1964 after he pleaded guilty to having a sawn off shotgun at Knocklyon shopping centre on July 5th 2012.

He received a concurrent three year suspended sentence after also pleading guilty to having a sledgehammer and a plastic bottle containing petrol and socks, contrary to the Criminal Justice (Theft and Fraud Offences) Act 2001, in connection with the same incident at Knocklyon.

He was a drug addict with 26 previous convictions but the Circuit Criminal Court, in sentencing him, took into account he was successfully addressing his drug problems at Coolmine Drug Treatment Centre and had not come to adverse Garda attention in the interim. The suspension was imposed on the basis of the “last chance” principle.

The DPP successfully appealed the sentences as unduly lenient to the Court of Appeal which imposed the mandatory minimum sentence of five years imprisonment as provided for in Section 27(A) 8.

After the High Court and Court of Appeal dismissed the claims of unconstitutionality, the Supreme Court agreed to hear a further appeal.

The court agreed Ellis is entitled to a declaration that Section 27A (8) of the 1964 Act, as substituted by section 59 of the Criminal Justice Act 2006, is repugnant to the Constitution.

Ms Justice Mary Finlay Geoghegan, giving the court’s main judgment, stressed the consequences for Ellis of the declaration was a matter for the Court of Appeal to decide as its decision on Ellis’ appeal over the five year sentence was informed by Section 27(A) 8.

That appeal should be “promptly” re-entered before the appeal court, she said.

Ellis was entitled to the declaration because the Oireachtas, in enacting Section 27A(8) had impermissibly crossed the divide in the constitutional separation of powers and sought to determine the minimum penalty which must be imposed by a court, not on all persons convicted under Section 27A(1) but only a limited group, those who have previously committed one or more of the listed offences, she said.

She stressed the Supreme Court was not asked to consider in this appeal any form of legislation which falls short of excluding a court’s entitlement to depart, in any way, from the sentence specified by law.

The Oireachtas clearly has a role in determining policy in relation to commission of offences which apply to all convicted persons, she said. The extent of the permissible role of the Oireachtas in specifying factors which should be taken into account by a court in deciding on an appropriate sentence, or a starting point from which a court may, for stated or exceptional reasons, depart from, did not require consideration in this appeal.

What is sometimes described as the “presumptive or indicative” sentence, such as those provided for in subsections 27A (4) to (6) of the 1961 Act, is one such example not under consideration in this appeal.

In a concurring judgment, Mr Justice Charleton agreed the provision should be struck down. That does not mean, and should not mean in this case, the automatic release of the offender which was a matter for the Court of Appeal.