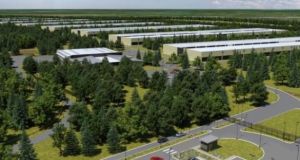 The Supreme Court has reserved judgment on an appeal over whether An Bord Pleanála breached its obligations in how it approved the first phase of tech giant Apple’s planned €850 million data centre in Co Galway.

While Apple is not proceeding with the Athenry project, the court’s decision is likely to affect the board’s consideration of similar data centre developments.

The five judge Supreme Court heard an appeal on Monday by two objectors arising from the High Court’s dismissal of their challenge over how the board dealt with the company’s proposal.

The appeal was brought by Sinead Fitzpatrick, who lives close to the planned development, and Allan Daly, of Athenry.

It was opposed by the board and the State but Apple was not involved.

The central issue concerns the manner in which the board was required by law to have regard to the potential expansion of the data centre project from one data hall to the possible construction of a total of eight data halls.

The Supreme Court will also consider whether a point of law arises concerning the application of broad general principles of EU law in particular cases which should be referred to the Court of Justice of the EU.

Michael McDowell SC, for the appellants, argued the board “radically misapplied” the law in the way it granted permission for the first phase.

The board cannot permit a “salami style slicing and dicing” of major projects to avoid “hard questions” and a “genuine” environmental impact assessment (EIA) of such projects, particularly the impact of their energy demands, he argued.

Eight data halls would increase the total demand on the national grid by between six and eight per cent but the board conducted an EIA for just one hall, not eight, he said.

Without assessing whether this was a sustainable development from an energy point of view, the board inspector took the view employment considerations outweighed whatever doubt exists on the energy front, he said.

The Industrial Development Authority had claimed about 300 construction workers would be engaged and the project would involve total investment of about €850 million over the estimated 15 years it would take to build all eight halls.

If jobs are to be weighed against energy issues, there must be an effort to balance out the two but there was no effort here to show how 300 jobs justifies a 6 per cent increase in energy requirements, Mr McDowell argued.

Apple had said the centre would be powered by 100 per cent renewable energy but the inspector had concluded the best that could be secured was average renewability figures over the 15 years, he added.

Nuala Butler SC, for the board, said it was required “to take into account as far as practicable” the potential build out of the Apple “masterplan” for eight data halls.

The board took the masterplan into account “on a broad level” but disputed an EIA on the entire masterplan was required, she said.

There was no “deliberate project splitting” and “nothing curious” about how Apple applied for permission. The board had conducted no EIA on the masterplan because it was not granting consent for the masterplan, she said.

All eight data halls were not intended to come on stream until sometime between 2030-35 and it would have been completely inappropriate for the board to decide in 2015 what was going to happen in 2035.

Energy demands were considered and while Apple could not show it would use 100 per cent renewable energy, that situation but could be different in 2035, she added.

James Connolly SC, for the State, supported the board’s position and also maintained there was no requirement to carry out an EIA on the entire project.