Broadcast of two judgments, on extradition and redress, aimed at ‘demystifying’ courts 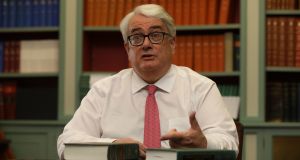 The first live broadcast of court proceedings in the history of the State is due to take place at the Supreme Court on Tuesday.

RTÉ will broadcast two judgments of the court, presided over by the Chief Justice, Mr Justice Frank Clarke, on the RTÉ News Now and on rte.ie from 9.30am. They can also be watched below.

Mr Justice Clarke said the move was aimed at “demystifying” the courts process. “We wish to allow people see how their highest court operates. This will help explain and create an understanding of the courts.”

He said it was a “start” and following a test period, its success would be reviewed with a view to expanding coverage next year. This might include televising parties making their arguments in the Supreme Court.

Jon Williams, managing director of RTÉ News & Current Affairs said it was “vital that justice is not just done, but is seen to be done”.

The first judgment, due to be delivered by a five-judge court just before 10am, concerns an appeal by Patrick Lee (43) of Newtown, Co Kildare, against an order for his extradition to the United States on charges related to alleged mortgage fraud. Mr Lee denies he knowingly engaged in a scheme to intentionally defraud various American banks and mortgage lenders of loans for properties that were never repaid.

The second judgment, also by a five-judge court, involves an appeal by a man over being excluded from the Residential Institutions Redress scheme.

Because judgments of the Supreme Court are handed down and not read, except for the principal conclusions, the proceedings are not expected to be lengthy.

Although cameras have previously been admitted to the Supreme Court on a small number of occasions, including to record a speech by the former chief justice Susan Denham marking the establishment of the Court of Appeal, this is the first time cameras have been permitted to record court proceedings.

Subject to the consent of the judiciary and the Courts Service, it may lead to future live broadcasts, including coverage of the hearing of appeals in the Supreme Court. Because it is an appellate court, it does not hear evidence.

There may also be potential for broadcasts of proceedings before the Court of Appeal and perhaps the High Court and Circuit Court.

The live broadcasting of court proceedings has been discussed for years but the impetus for it has been attributed to a meeting five years ago between Ms Denham and then RTÉ deputy director general Kevin Bakhurst.

Since his appointment as Chief Justice last July, Mr Justice Clarke has been keen to advance the project, and his involvement and support was a crucial factor.

The project has presented considerable technical challenges, as the Four Courts is not well-equipped to deal with 21st-century technology. The first broadcast will involve four cameras and substantial cabling.