Some Catholics regard church’s stance as negative 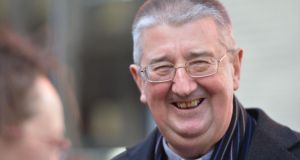 Archbishop of Dublin Diarmuid Martin gave a In a wide-ranging address to the Holy Cross College, Clonliffe, on Thursday night on the responses from the people in the archdiocese, in the recent consultation carried out. Photograph: Alan Betson

Some Catholics regarded the church’s position on same-sex relations as being purely negative and judgmental, Archbishop Dermot Martin has said.

Many felt that there should be some way of civilly recognising stable same-sex unions, he added. “But there was a clear hesitancy, uneasiness and opposition with regard to marriage for same sex unions.”

In a wide-ranging address, Archbishop Martin spoke to priests at Holy Cross College, Clonliffe, last night on the many responses from the people in the archdiocese, in the recent consultation carried out for the forthcoming Synod of Bishops in Rome.

Responses from the consultation have been sent to Rome. The Extraordinary General Assembly of the Synod of Bishops is due to be held in Rome, from October 5th-19th on the theme Pastoral Challenges of the Family in the Context of Evangelisation.


Consultation
“The results are not very different to those which emerged in the same consultation process in various other European cities, on such subjects as family planning, pre-marital cohabitation, the problems of the divorced and re-married, the attitude to same sex relationships,” he said.

“The general response was that the teaching on marriage and the family is poorly understood and that it was poorly accepted and disconnected from real life experience of families – and not by just younger people,” he said.

“Many said that the teaching appears as not practical in relation to people’s day-to-day struggles, being at best an unrealistic ideal. There appears to be a ‘theory-practice’ gap. One reply noted: ‘A lot of preaching and teaching does not relate to everyday life; it is above the head of struggling and hurt people,” Archbishop Martin said.

“Another replied: ‘Church teaching often appears theoretical and remote from an understanding of the real lived experience of couples’.”


Concern
The archbishop told the priests and members of the pastoral council that in the replies, concern was expressed about the high number of those who were living in what the church regards as irregular situations, whether because they were living together before marriage or because they were divorced and remarried.

Many spoke of these people suffering, feeling guilty, feeling marginalised, feeling excluded, feeling hurt, even despised, he said. The strong pattern in the responses was that there should be an attitude of openness and compassion, outreach and welcome to these people, with less judgment and more listening to their experience.

The archbishop said: “What interests me this evening is to look at what was said about the church’s pastoral care of marriage and the family and what we should be doing in our parishes.

“Many of the replies noted that there is little attempt at explaining the teaching,” he said. “One person responded: ‘I’ve been a massgoer all my life, I am now 51 years old, I have never heard a sermon on family’.”

Archbishop Martin said it was generally thought that there was very little, if any, formation on church teaching. Education was described as inadequate, taking place mainly at Mass (if at all).

He said it had been remarked that “the Church has been silent recently.”

Responses also repeatedly said that teaching tends to be rule-focused, rather than Scriptural or pastoral, said Archbishop Martin.