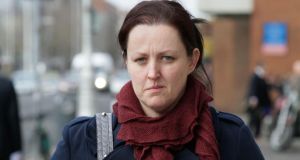 Cheryl Mellett, Athlone, Co Westmeath, who has lost her appeal at the Supreme Court. Photograph: Collins/Courts


A soldier has lost her Supreme Court bid to prevent her recommended discharge from the Defence Forces following her failure to pass fitness tests.

Cheryl Mellett was admitted as a Naval recruit in November 2004 for a five-year period and passed her fitness test that year. After suffering “a traumatic personal experience” in the Defence Forces in 2006, she failed her fitness tests between 2006 and 2009 and gained considerable weight. She underwent a gall bladder operation in September 2010 and suffered soft tissue injuries in an accident in January 2011.

In April 2011, she achieved the necessary body mass index to undergo a fitness test but was not permitted to take that as she was reported as suffering from a medical condition. In February 2012, her general officer commanding recommended more time for her to achieve the necessary level of fitness.

A month later, Maj Gen Boyle, the officer with statutory authority to order discharge, ordered her discharge, scheduled for May 2012, which she challenged. In March 2013 in the High Court, Mr Justice Nicholas Kearns found she was well aware of the sole reason for consideration of her discharge.

She appealed that decision but the three-judge Supreme Court yesterday dismissed her appeal. The fact of “central and overwhelming importance” in this case was that Ms Mellett had been unable to reach Army fitness standards, of which she was fully aware, Mr Justice Nial Fennelly said yesterday when giving the court’s judgment.

She had tried to reach the fitness standards without success and, as a result, had been finally and definitely refused an extension of service. There was no discretion to decide otherwise or to extend her service, he said.

At best, Ms Mellett was in the anomalous position of a person serving in the Defence Forces without engagement and it was “not at all surprising” they should not wish to retain personnel in that irregular status.