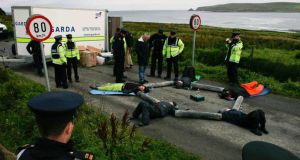 A “lock-on” protest against the Corrib Gas project in 2008. Liamy MacNally claims his coverage of the controversy resulted in his being made redundant by Midwest Radio. Photo Shay Fennelly.

A reporter has claimed he was made redundant from a radio station because the station’s management took issue with his coverage of the Corrib gas controversy in north Mayo.

Yesterday, Mr MacNally told an Employment Appeals Tribunal in Castlebar that he had been made redundant in 2010.

He said he had worked with Midwest Radio for more than 10 years as a senior news reporter.

He claimed a change in attitude towards him from managing director Paul Claffey and station management was noticeable since his coverage of the “Rossport Five” story in 2005. Five people from Rossport in north Mayo were jailed for contempt of court for refusing to allow Shell access to the their private land.

“Several times Paul Claffey came to me saying politicians and development companies were complaining of our negative coverage of Shell,” Mr MacNally told the tribunal.

He said he had always given Shell a right of reply but claimed Shell had been unreasonable in its requests, seeking 24 hours’ notice for a response. He also said Midwest Radio covered the positive side of the Corrib gas story too.

He told the tribunal that Mr Claffey had “bawled me out of it” in front of work colleagues when Mr MacNally asked about takeover plans by a Scottish radio group.

“He accused me of using my interviewing skills which I would use on politicians on him. I said I was just asking a straightforward question. He did apologise afterwards,” Mr MacNally said.

He added that all news staff were prepared to take a cut in hours and days to stop any redundancies but this was “rejected completely” by Mr Claffey. Mr MacNally said there was no selection process revealed as to why he was made redundant.

At the first day of the tribunal on March 12th last, Paul Claffey said that the main reason for the redundancy was cost-cutting and they sought one voluntary redundancy from his four news staff, but none were forthcoming.

He said he held talks with Mr MacNally about voluntary redundancy and offered a severance package of €40,176 to him which he says he rejected. He conceded that there were rows between Mr MacNally and him over the nature of his work on a number of news stories, notably the Shell dispute in north Mayo.

He said he received complaints ‘on a continuous basis’ about stories Liamy MacNally ran. He added that the ‘very forceful’ way Mr MacNally expressed his opinion in a column in The Mayo News presented problems.
Chairwoman of the tribunal Dr Ann-Marie Courell adjourned the case for consideration of a final verdict.