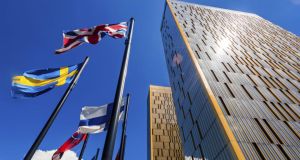 James Elliot Construction had sued Irish Asphalt Ltd over the supply of defective infill material for the construction of a youth centre in Ballymun in 2005. The case has been referred to the European Court of Justice (above). Photograph: Thinkstock

A legal action over the supply of defective infill material for the construction of a Dublin youth centre has been referred to the European Court of Justice for determination of issues including the merchantable quality of goods.

James Elliot Construction had sued Irish Asphalt Ltd which supplied the rock product for use as foundation in the Ballymun Central Youth Facility in 2005.

Within three years, floors and walls began to crack because of the presence of excess pyrite in the infill and the centre had to undergo a €1.55 million remediation project.

The High Court found the material was not fit for purpose or of merchantable quality under sale and supply of goods legislation and had given rise to pyritic heave.

Irish Asphalt Ltd, in an appeal to the Supreme Court, challenged that decision and maintained, notwithstanding findings of fact by the High Court, it was not liable to James Elliot Construction as a matter of domestic and EU law.

It argued an implied term of the contract as to fitness for purpose of the material had not been breached.

The Supreme Court said it was setting aside the High Court finding in relation to whether the material was fit for purpose under the Sale of Goods and Supply of Services Act 1980 but it upheld other findings including that there was a breach of the same legislation in terms of merchantability.

It also rejected Irish Asphalt’s contention any liability to James Elliot Construction was limited to the cost of replacement of the infill material.

It also upheld the High Court view that the sulphur content of the infill, which indicates the presence of pyrite and meant the material did not meet the required standard, was supported by the evidence and should not be overturned.

In the Supreme Court decision ordering a referencing of the case to the European Court of Justice, Mr Justice Donal O’Donnell said as a matter of national law James Elliot Construction would be entitled to succeed and Irish Asphalt Ltd’s appeal would fail.

The questions include whether the interpretation of the national and EU standard in relation to construction products is a matter upon which a preliminary ruling may be sought from the European Court of Justice.

If the answer to that question is yes, the European Court of Justice must then decide whether compliance with that EU standard can only be established when tests on the material were carried out at the time of production and/or supply or breach of the standard can be proven by tests conducted later.

The European Court of Justice is further asked whether a national court is obliged to disapply national law by implying terms as to merchantability and fitness for purpose on grounds that statutory terms create standards which have not been notified in accordance with an EU directive on technical standards (Directive 98/34).

In a statement after the Supreme Court decision, Irish Asphalt Ltd said the reference to the European Court of Justice justified the company’s decision to appeal the case and highlighted the complexity of the legal issues concerning testing and standards.

Irish Asphalt Ltd said it acknowledged the severe difficulties that have been caused to many homeowners but said an expert panel in 2012 concluded the pyrite issue was not foreseen by anyone, including construction and quarry companies.

Noreside Construction Ltd, Kilkenny, sued Irish Asphalt Ltd for indemnity against legal actions arising out of the presence of pyrite in material it supplied for Noreside to build 52 houses and 31 senior citizens’ homes for Dublin City Council at Griffith Avenue, Finglas, Dublin.