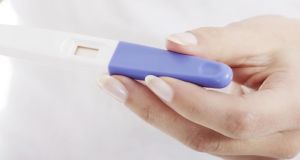 A Co Wicklow mother has settled a €38,000 damages claim against the pharmacy for an undisclosed sum.

A Co Wicklow mother, who claimed a pharmacy allowed her husband to watch CCTV footage of her buying a pregnancy test kit, has settled a €38,000 damages claim against the pharmacy for an undisclosed sum.

The woman, who cannot be named by order of the judge in the Circuit Civil Court, said her marriage had been highly dysfunctional and difficult for a number of years before the October 2010 incident. The incident, she said, worsened her relationship with her now deceased husband.

She told her barrister Martina O’Neill that she had bought the pregnancy test for a friend, but her husband found the receipt in their home and went to the pharmacy with it.

The court heard the husband was very possessive and had displayed abusive and violent behaviour towards his wife. When he arrived at the pharmacy he pretended to be very distressed and “tricked” one of the employees into showing him CCTV coverage of the actual purchase.

The husband told the pharmacy employee he had found the receipt in his teenage daughter’s bedroom and was concerned that she was sexually active. This had been why he had asked to be shown CCTV footage.

When asked by counsel for the pharmacy if her husband could have played “a low trick” on the employee, the woman said she could see him playing such a role as he would have been very good at it.

Mr English told the court the pharmacy assistant was very concerned for the wellbeing of the man’s teenage daughter and, due to his agitated state, showed him CCTV footage of a woman purchasing the test.

Circuit Court president Mr Justice Raymond Groarke was told that the father, who had identified the woman as being his daughter’s aunt, had secretly taken pictures of the CCTV footage with his mobile phone. The court heard the woman in the video was, in fact, the girl’s mother and plaintiff in the court proceedings.

The mother told the court she and her husband were not having an intimate relationship at the time and this had led to a row with her husband as he thought she had bought the test for herself.

She said her husband sent her, on her own mobile phone, a picture of her purchasing the pregnancy test. She had been scared about going home as she knew he would use it to start a row.

The woman told the judge that her husband and she had separated on and off. He had been physically and mentally abusive towards her. Gardaí­ had intervened several times after being called by the couple’s children.

The court heard the incident had not made their “traumatic marriage” any better as the husband had used the pregnancy test purchase as “a stick to beat her with” and made her life a misery.

“Every day after that he would talk about it any chance he could get. He became abusive on a daily basis,” she told the court.

She suffered acute stress and depression and had needed to obtain counselling and medication.

The mother had afterwards issued the court proceedings in which she sued the pharmacy under the Data Protection Act for negligence and breach of duty in allowing the footage to be shown to the father.

Mr English told Judge Groarke that if the father had taken photographs of a computer screen, he had done so without the pharmacy’s consent and the pharmacy fully contested the mother’s claim.

Counsel said the act allowed for personal data to be given to a third party if it was required urgently to protect someone’s health. He said the father had been highly agitated and distressed.

Following a brief adjournment to allow talks between the parties, Ms O’Neill said the matter had resolved. The judge, who had earlier refused an application by Ms O’Neill for the case to be heard in camera but had made an order restraining identity of any of the parties, struck out the case.