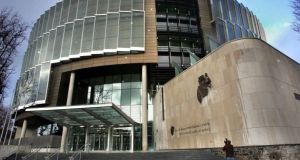 Peter Butterly, a 35-year-old father of two, was shot dead shortly after 2pm in the car park of the Huntsman Inn at Gormanston, Co Meath on March 6th, 2013.

Two men charged in connection with the murder of a dissident republican have been found not guilty by direction of the Special Criminal Court, after a trial where gardaí refused to release secret material in the case, despite a court ruling that it should be disclosed.

The trial had sat for 36 days.

The non-jury court on Thursday ruled that the head of the Special Detective Unit’s “belief evidence” as to the men’s IRA membership was inadmissible because “issues of unfairness” arose in light of his “blanket” claim of privilege over the material upon which he based his belief.

Ms Justice Tara Burns said that without this “belief evidence”, the evidence relating to the charges was “inherently tenuous” and the court could not convict the men. The court thus directed they be found not guilty of IRA membership.

In her ruling on Thursday, the judge also referred to “worrying aspects” of the evidence of Detective Chief Superintendent Anthony Howard, in light of a claim that emerged in the trial made by former accused-turned-State’s-witness David Cullen in relation to the two accused men.

Mr Butterly, a 35-year-old father of two, was shot dead shortly after 2pm in the car park of the Huntsman Inn at Gormanston, Co Meath on March 6th, 2013.

He died from gun shot wounds to his neck and upper back.

Det Chief Supt Howard previously told the court he believes Mr Kennedy and Mr Murphy are members of the IRA and were members on March 6th, 2013, having formed this belief after considering underlying material held by the gardaí in December 2017.

He claimed privilege over this underlying material and neither the prosecution, defence or judges of the court saw the material.

Before his cross-examination by the defence was set to begin, a letter on behalf of Mr Murphy by Thompson Solicitors, mirrored in a letter written on behalf of Mr Kennedy, was sent to the Det Chief Supt asking him questions about the basis of his belief. In response, he said he was claiming privilege.

The defence asked the court to review the privilege claim over the information sought in the letter and pointed out that the prosecution had not reviewed the underlying material.

Ms Justice Tara Burns subsequently upheld the privilege claim but ruled that the prosecution should view the material.

Evidence of the belief of a Garda chief superintendent that an accused is a member of the IRA is routinely used in membership trials. Privilege can be claimed on the material underlying the belief, usually on the grounds of the protection of life and property, the protection of ongoing and future investigations and the security of the State.

Although judges in past trials ruled that the Special Criminal Court itself should view any underlying files relevant to belief evidence, this is the first case in which the court ruled that such material should be viewed by the prosecution.

The trial of Mr Murphy and Mr Kennedy heard that Assistant Commissioner Michael O’Sullivan wrote a letter to the DPP, stating that the material would not be given to the Director out of security concerns. The court did not hear evidence of the concerns but Paul O’Higgins SC, for the State, said that the DPP agreed with the security issues outlined by An Garda Síochána.

Ms Justice Burns initially said the court was “minded” to view the material but subsequently found she was “dissuaded” from doing so after defence submissions.

Det Chief Supt Howard was cross-examined on Monday but on the following day, the defence made an application for his evidence to be ruled inadmissible and for the trial to discontinue.

John D Fitzgerald SC, for Mr Kennedy told the court that because of Det Chief Supt Howard’s “very, very broad claim of privilege in this case”, his cross-examination was “one of the more sterile exercises I’ve had to conduct”.

Hugh Hartnett SC, for Mr Murphy said the garda had “completely insulated himself from any form of cross-examination” and therefore his evidence was “valueless”.

Mr Fitzgerald submitted that the DPP had acted “bizarrely” by not complying with the ruling of the court, which was at “at odds” with her role and “impossible to understand”. Ms Justice Burns said she did not understand “what thought process is going on” at the office of the DPP.

On Thursday Ms Justice Burns told the court that a trial has a responsibility to ensure “belief evidence” does not create an unfairness.

She said the case before the court was in “marked contrast” to previous cases where information concerning underlying material in belief evidence had been provided to the court, while some chief superintendents giving such evidence had almost 30 years’ experience in investigating subversive activities.

Det Chief Supt Howard had “limited” involvement in subversive investigations and was “relatively new” to the SDU - which investigates subversive activities - when he formed his belief, given that he became head of the unit in August 2017, she said.

Ms Justice Burns said the belief evidence “amounts to a bare assertion” and the “blanket” claim of privilege left the defence counsel unable to cross-examine in “any meaningful way”.

She said there was “no evidence” before the court about the underlying material and the court knows “nothing of the considerations” which Det Chief Supt Howard “applied”.

She added: “The attitude of An Garda Síochána in refusing to even give documents to the director [DPP]establishes the broad nature of the privilege claim they are maintaining in this case.”

The judge said there is an entitlement to privilege but added “the extent of the claim can have consequences”.

“This is a fairness issue with respect to a fair trial right,” she said.

She also said there are “other worrying aspects” in respect of the guard’s evidence.

The court previously heard that David Cullen, whose evidence was used in the trials of four people convicted of Mr Butterly’s murder and who is now living abroad in a protection program, spoke to witness protection personnel in February 2019. Cullen said that, if called as a witness, he would tell the court that Mr Murphy was “never a member of the IRA”.

Det Chief Supt Howard only became aware of the claim during the trial after he was informed by another SDU member, the court heard.

The court previously heard that Superintendent Frank Walsh recommended to Asst Comm O’Sullivan, on March 6th, 2019, that Mr Cullen’s utterance from February needed to be brought to the attention of the DPP, as it was a matter that would need to be considered by the defence.

However, the court heard the DPP and the defence did not become aware of it until October 22nd, 2019.

Referring to the utterance of Mr Cullen and his specific claim that Mr Murphy was “not a member of the IRA” and that “he didn’t know Mr Kennedy”, Ms Justice Burns said Mr Cullen’s claims were not brought to the attention of Det Chief Supt Howard until after the trial began “and then not in a formal manner”.

She said forming belief evidence is “serious business” and “exceptional care and prudence” must be exercised.

Ms Justice Burns said “issues of unfairness” arise in the guard’s evidence because of the defence’s inability to carry out any “meaningful cross examination” and the “deficiencies” regarding matters pertaining to Mr Cullen’s claims.

After ruling the evidence was inadmissible, she continued to say that while there were “suspicious circumstances” surrounding the activities of the two men, “the evidence related to the charge before the court is inherently tenuous when evidence is considered as a whole”.

The judge then directed verdicts of not guilty.

A further charge against Mr Kennedy of carrying out an act intending to pervert the course of justice, by destroying a SIM card on March 6th, 2013, has been adjourned until January 13th next.