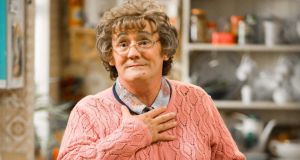 Brendan O’Carroll as Agnes Brown. The most watched show on Christmas Day in the UK.

A fruit and vegetable trader from Dublin’s Moore Street was more popular than a time-travelling Doctor Who and the aristocrats from Downton Abbey for UK television audiences on Christmas Day.

Brendan O’Carroll’s Mrs Brown’s Boys Christmas Special was the most watched show this Christmas in Ireland or Britain with 9.4 million viewers tuning in to watch the antics of a character who is based on Ireland’s first female Labour TD.

It was somewhat of a surprise for the BBC itself that Mrs Brown’s Boys topped the Christmas viewing rankings as the corporation had been heavily promoting the Dr Who special, but the Time Lord could only bring in 8.3 million viewers. This despite the unveiling of a new Doctor Who in the shape of actor Peter Capaldi.

This was the first year the BBC scheduled Mrs Brown’s Boys for a prime-time Christmas Day broadcast.

Mass audience soaps Eastenders and Coronation Street came in at the close to 8 million mark in the UK, with the inexplicably popular Downton Abbey down at 6.6 million viewers. RTÉ has yet to release its Christmas viewing figures.

The Christmas number one viewing slot is a major triumph for Dubliner O’Carroll. The show has a much smaller budget and far less fawning media attention than the likes of Doctor Who and Downton Abbey.

Critics mumble, but viewing figures talk – and unequivocally so. Mrs Brown’s Boys has received some of the most damning criticisms of any prime-time show in recent memory (most notably by the broadsheet press). One review had it that “Mrs Brown’s Boys makes you vaguely embarrassed to be Irish”. Others have lacerated the show for being cliché-ridden, derivative and comedically outdated. O’Carroll himself refers to the show’s relationship with the media as being a “hate-hate” affair.

Success
This most recent success vindicates the BBC’s decision to move away from their usual hideously middle-class type of sitcom (shows such as My Family) to produce programmes people actually want to see.

A live stage show of Mrs Brown’s Boys has sold out in both London’s O2 and Dublin’s O2 this year and a major cinema feature is being filmed.

O’Carroll has said that the character of Agnes Browne is based on his mother, Maureen O’Carroll, who was the Labour chief whip from 1954 to 1957. “Mrs Brown is my mother Maureen – with all her wisdom but not her education”.