Dundon has pleaded not guilty to murdering Shane Geoghegan in 2008 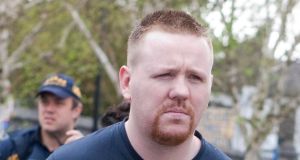 A person seen on CCTV footage with a man accused of murder, handed over his phone to gardaí on the day of the shooting, the Special Criminal Court has heard.

The trial has previously heard that Philip Collopy allegedly received a phone call from John Dundon on the morning of the shooting, informing him that the wrong man had been killed.

The court has already heard that Mr Geoghegan died at the scene of gunshot wounds to his head and trunk. Today retired Detective Garda Sean Lynch told the non-jury court he went to the scene of the shooting that morning.

The court was shown CCTV footage of four men walking on Cruises Street in Limerick, over a week before the shooting.

He identified the four men as John Dundon, Philip Collopy, his brother Kieran Collopy and Barry Doyle, who the court heard was convicted of the murder of Shane Geoghegan.

He told the court two individuals he knew called Phillip Collopy and his brother Kieran arrived at the scene.

He said Phillip Collopy handed him his mobile phone, which he then put into a self-sealing evidence bag. The three-judge court heard that Philip Collopy subsequently died in an accident.

Prosecution witness April Collins (26) previously told the court that she, her then partner Ger Dundon, JohnDundon and Barry Doyle met in the car park of a pub in Limerick at around 6.30am on the morning of November 9th, 2008.

She said it was just hours after Mr Geoghegan was shot dead in a case of mistaken identity near his home in Dooradoyle, which was four doors down from the home of the intended target John McNamara.

Ms Collins who is the former girlfriend of the accused’s brother Gerard previously told the court she witnessed John Dundon ordering Barry Doyle to kill a man called Johnny Mac.

She said John Dundon was “very excited in himself” and was saying “Johnny Mac is dead. We got him.”

April Collins’s sister Lisa, who is another prosecution witness, was recalled to the stand today for cross-examination by the defence.

Mr Brendan Nix SC defending asked her about a Crimecall reconstruction of Mr Geoghegan’s killing which was screened on RTÉ on November 18th, 2008.

Mr Nix said the programme was “very moving” as the family were involved and she agreed that she had seen it but had made no comment when interviewed by gardai in February 2009.

“I was afraid to say anything,” she told the court. Victoria Gunnery told Mr Sean Guerin BL prosecuting that she was Barry Doyle’s girlfriend in 2008 and that they had a child together.

She said after her boyfriend moved to Limerick in August 2008 they maintained contact by phone and she gave the mobile numbers she said they used to gardaí.

The court directed the passport office to make any particulars on file relating to the accused available. His legal team believes details of a passport he held in 2008 could have a bearing on the case as it showed the accused’s comings and goings”.

An official from the passport office is expected to give evidence in the case when the trial resumes on Tuesday. Mr Nix told the court that John Dundon uses his mother’s surname ‘McCarthy’ as his parents never married. The trial continues.

Harris signs order to designate coronavirus as a notifiable disease 18:42
Patricia O’Connor murder trial: Jury asked to park ‘shocking’ nature of case outside door 18:37
Teenage girl (16) killed in Cork crash named as Kimberly O’Connor 18:30
Police did not search yard where man accused of garda murder said he had been 18:10
McDonald expected to get highest number of votes but no taoiseach to be elected 17:55