Lahinch promenade to reopen by weekend 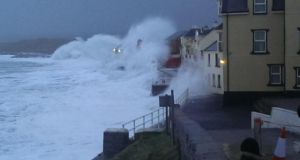 suffered what has been estimated to be several million euro worth of damage in recent days could reopen before the weekend.

The prom at the seaside town was devastated early on Friday morning and sustained further damage on Monday as tidal conditions and storm- force winds battered the coastline.

Clare County Council’s senior engineer Tom Tiernan said: “We are engaged in a clean-up operation and are due to commence a full assessment of the damage caused in recent days. However, it is the council’s intention to reopen the promenade by or before the weekend.”

Clare county manager Tom Coughlan said: “While the damage caused to Lahinch promenade is extensive and damaging to the local economy in the short term, the objective of Clare County Council is not just to repair the damage but to put in place facilities which will further enhance Lahinch as a tourism destination.

“We must be conscious that other parts of the county, particularly coastal locations, also suffered significant damage during the storms. The report being prepared by the council ahead of next Monday’s meeting will also deal with these locations for the consideration of elected members,” Mr Coughlan added.

Roads have been washed away. One bridge was damaged extensively. Homes and thousands of acres of land have been flooded all the way from Kilbaha village on the Loop Head peninsula to Ballyvaughan in the north of the county.

Washed away
Sections of the main road through Kilbaha, along with large sections of sea wall, have been washed away. There is now no access to the village from either side with traffic being diverted up a country road.

Since Monday evening, Clare County Council has been carrying out repairs to roads in the area in an effort to provide access to communities on the Loop Head peninsula. Locals are using an old bog road, which is hardly wide enough for one car, to get to Kilbaha.

The local authority has been unable to put a cost on the damage caused along the county’s Atlantic coast, though some have estimated the damage has run into tens of millions of euro.