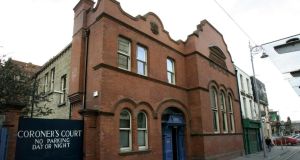 Conversations on the Facebook page of a 12-year-old girl who took her own life show her friends had concerns she was being cyberbullied over her self-harming, an inquest heard.

Lara Gibbs-Burns died after she was found in stables at her family home in Grange, Enfield, Co Meath, on November 24th, 2012. She had attended self-harm crisis centre Pieta House for a number of weeks before her death after telling a counsellor at Maynooth Post-Primary School she was self-harming.

Her mother, Helene Burns, told the inquest the family was unaware of the self-harming until contacted by the school.

However, on the third day of the inquest yesterday, coroner Dr Brian Farrell put documents detailing Lara’s interactions on Facebook on record, saying it appeared some contributors were concerned she was being cyberbullied. Self-harming These interactions dated back more than a year to when Lara was in primary school and the issue of her self-harming was being discussed, he said. A third party warned others about cyberbullying Lara, he said, but there is no record of the previous interaction this person was concerned about.

Garda Insp Paul Dolan said the Facebook page was looked at but there was no evidence to sustain a criminal charge.

The inquest had heard about an incident on November 16th when the school investigated rumours Lara had given another student a blade.

While Lara was exonerated, Dr Farrell said this “clearly” shows there was talk among students about her self-harm. See a counsellor Ms Burns had claimed Lara’s schoolmates became aware she was self-harming when a teacher made her roll up her sleeve during an art class and then sent her to see a counsellor.

Giving evidence previously, school principal Johnny Nevin said he had no information to suggest this was correct. He returned to the stand yesterday to tell the coroner he had spoken with Lara’s art teacher, who confirmed that on occasion students would be asked to roll up their sleeves.

“She would never have done it in a targeted way to any student and definitely not to Lara to cause any embarrassment or to highlight her self-harm,” Mr Nevin said.

It was his understanding the teacher had dealt with it sensitively and discreetly, he said, and Lara was “definitely not” sent out of the class to see a counsellor.

Returning a verdict that Lara took her own life, Dr Farrell said there were a number of conflicts in the evidence he could not resolve.