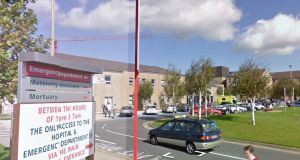 A woman who needs residential care for life allegedly due to operations at Waterford Regional Hospital (above) has settled two legal actions against the HSE. File photograph: Google Street View

A woman who needs residential care for the rest of her life allegedly as a result of operations at Waterford Regional Hospital has settled two legal actions against the HSE for some €1.6 million.

Afterwards, her sons Frank and Shane said they can now give their mother the care she needs in some sort of comfort.

Approving the settlement in court earlier, Mr Justice Kevin Cross at the High Court praised both sons for the “exemplary” way in which they had cared for their mother.

Aidan Walsh SC, for Ms Power, said she went into Waterford Regional Hospital for a hysterectomy in 2004, but her bowel was perforated.

She later had to have other procedures and it was decided she would re-attend for an open procedure to repair a hernia, as she could not even bend down.

Further damage was caused, Ms Power’s condition deteriorated and she developed septicaemia, counsel said. She had been in an induced coma but made a “miraculous recovery” and came out of the coma.

One of her sons had given up his job to care for his mother, counsel said.

Ms Power, formerly of Tir Connell Avenue, Lismore Lawn, Waterford, but now in residential care, sued the HSE over the hysterectomy operation of June 2004 and a subsequent procedure in 2009.

In the first action, she sued over a perforated bowel suffered during the hysterectomy operation. It was claimed there was a failure to diagnose a bowel perforation adequately or in a timely manner.

In her second action she claimed that, as a result of the alleged negligence in relation to surgery in June 2009, she suffered serious personal injury and has been left dependent and requiring permanent in-patient care.

It was claimed a laparoscopy carried out on her was an unreasonable procedure in the circumstances, instead of an open procedure. It was also alleged there was failure to explain to her the nature of the operation and the risks involved.

After the operation, it was claimed she went into a coma and suffered brain damage. While she has use of her limbs, she is mentally and physically disabled and will need life-time residential care.