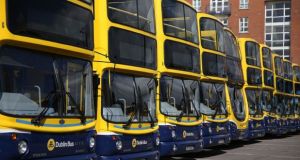 The court held it was ’utterly unreasonable and unrealistic’ to impose a duty of care requiring Dublin Bus drivers to check passengers are securely in their seats before driving off. File photograph: Brian Lawless/PA Wire

A woman must pay Dublin Bus’s legal costs after losing her appeal over the dismissal of her action for damages over a “nasty” injury suffered when she fell backwards down the stairs of a bus as the vehicle was moving off from a bus stop, the Court of Appeal has ruled.

There were no special circumstances entitling the court not to award costs to Dublin Bus against Margaret McGarr, the three judge court said.

It rejected arguments by Padraig McCartan SC, for Ms McGarr, of such special circumstances, including that the case raised an issue of public policy.

The three judge court made costs orders on Wednesday following its judgment earlier this month dismissing Ms McGarr’s appeal over the High Court’s rejection of her case.

Ms McGarr was home from England and staying with relatives in Glasnevin when the accident happened on October 3rd 2008 just after she boarded the number 19 bus to meet a friend in the city.

In evidence, she said, as she approached the top of the stairs, there was a “very sudden jerk” of the bus which caused her to fall backwards and all the way down to the bottom of the stairs. Another passenger gave evidence that the bus jerked or jolted “quite violently” as it moved away from the stop.

Having viewed CCTV footage and heard the evidence, the High Court found the bus had not moved away violently, Ms McGarr was not holding a handrail at the precise moment of her fall and she had not proven negligence against Dublin Bus.

The appeal court, which also viewed the CCTV footage, agreed with the High Court.

In its judgment, the appeal court said the case raised an important question about the extent of Dublin Bus’s duty of care to passengers on a double decker bus. It held it was “utterly unreasonable and unrealistic” to impose a duty of care requiring Dublin Bus drivers to check passengers are securely in their seats before driving off.

Dublin Bus was entitled to assume “common knowledge” that buses, because of their sheer size and the volumes of traffic they typically travel in the city, “tend to sway and lurch a bit”, even when driven with great care, it also held. People know they need to hold onto the rails provided when standing on either of the decks or moving around, it added.

Drivers are required to take “reasonable care” and the evidence, including from CCTV footage, was the driver of this bus did not move forward in any abrupt, sudden or violent manner, it held.

The court found, while railings were provided on each side of the stairs, Ms McGarr failed to keep hold of either railing as she mounted the final three steps of the stairs. That alone was what caused her to lose balance when the bus moved off and there was “no breach” of the duty of care owed to her by Dublin Bus.