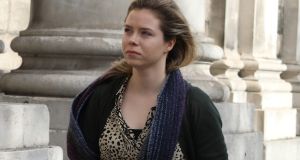 Aoife Bennett is suing the Minister for Health, the HSE, Glaxosmithkline (GSK) Biologicals SA, and the Health Products Regulatory Authority (HPRA), which has responsibility for authorising and monitoring medicines in Ireland. Photograph: Collins Courts 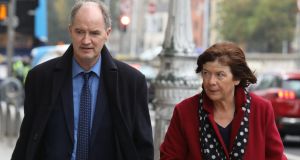 A woman whose daughter developed narcolepsy after receiving a State-administered vaccine in school has said she feels partly responsible for what has happened.

Mary Bennett told the High Court that she and her husband Pat took part in the decision that Aoife, who was 16 at the time, would receive the Pandemrix anti-swine flu vaccine. Her daughter was of an age where she could have given consent herself but the matter was treated as a family one, she said.

Mary Bennett said Aoife was one of a set of quadruplets and that prior to receiving the vaccine in December 2009, she was a fully healthy and athletic girl who saw sport as “the love of her life”.

Because she advised her daughter to received the vaccine, Mary Bennett said “in some ways, I feel responsible”.

At the time of vaccination, Aoife was concerned about getting a sore arm in the context of an upcoming volleyball match.

She claims she developed narcolepsy and cataplaxy disorder, which causes sudden collapses of muscle tone, because of the vaccine. The defendants are disputing the claims.

Mary Bennett told Jonathan Kilfeather SC, for Aoife Bennett, that if she knew then what she knew now - that the vaccine “had not been tested” on children of Aoife’s age, that it contained a new ingredient that had never been used before, and that the pandemic that led to the vaccination campaign was “nearly over” in Ireland by December 2009 - she would not have advised her daughter to get vaccinated.

Prior to the vaccination, she said Aoife was often first up in the house but within the weeks after she was having trouble getting out of bed.

In April 2010, she said Aoife began having episodes of sudden collapse, with the first occuring that month in the shower and leading to her breaking a tooth. She was also prone to suddenly falling asleep.

Mary Bennett said visited a series of medical practitioners with her daughter, whom it was suggested might have psychiatric or pyschological problems.

She said one doctor told Aoife to “get out of that wheelchair, there’s nothing wrong with you”. Aoife was prescribed an anti-depressant, but she was “a very determined girl” and insisted she was not depressed and that “some sort of virus” was behind what was happening to her.

Mary Bennett said she saw an article in a newspaper in March 2011 about other vaccine recipients having similar symptoms. This led to the condition finally being diagnosed by a sleep disorder specialist, Dr Cathriona Crowe.

Responding to Maurice Collins SC, for the Minister and the HSE, Mary Bennett said she and her family had taken the State’s advice about the vaccine.

“It was the State, not some shop down the road,” she said.

“I’m just a parent who got a letter,” Mary Bennett said. “I wouldn’t be in court today if my daughter hadn’t gotten narcolepsy from the vaccine.”

Mr Collins said the information leaflet her family had been given said there could be serious side effects, but they were very rare.

“Narcolepsy is a long-lasting and incurable condition. It is not a side effect,” Mary Bennett said.