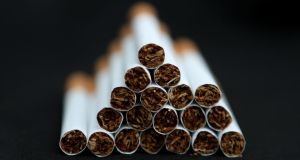 A supplier of tobacco products is opposing the State’s application to have the Court of Justice of the EU decide various legal issues in a challenge to plans to introduce plain packaging on tobacco products here.

Michael Cush SC, for the State, said JTI Ireland Ltd is opposing the referral, and the matter is urgent as the commencement date for the legislation was later this month.

Due to JTI’s opposition there would have to be a full hearing of the application for referral, and the sides had agreed a timetable for exchange of legal documents in advance of that full hearing, counsel said.

Mr Justice Brian McGovern in the High Court approved that timetable and listed the application for hearing on June 30th. He was told it was likely to last two days.

Last month, the State indicated it considered certain issues raised in the JTI action are similar to those raised in a separate case already referred to the Court of Justice by the High Court of England and Wales.

The State wanted to have the JTI case issues referred to the Court of Justice and heard at the same time as the English case, the court heard.

In a separate case over plain packaging brought by the Philip Morris tobacco company and British American Tobacco against the UK health secretary, the High Court of England and Wales has referred questions concerning the validity of a 2014 EU Directive - 2014/40/EU - which has a stated objective of harmonising labelling and packaging.

The action by JTI is against the Minister for Health, Ireland and the Attorney General and is aimed at preventing the commencement of the Public Health (Standardised Packaging of Tobacco) Act 2015.

It alleges the plain packaging law is contrary to EU harmonisation objectives and an obstacle to trade between member states.

The Irish legislation imposes stricter rules than those necessary to transpose the directive, it is alleged.

The Minister and State, it is also claimed, do not have the power or competence to derogate from the provisions of the directive.

Because harmonisation of labelling and packaging is a stated objective of the directive, a member state cannot adopt national measures which further restrict the free movement of goods on grounds of a high level of protection for human health, it alleges.

The new measures will distort and impair the dynamics of competition in the tobacco market, it also claims.

It is part of an international tobacco group with operations in 70 countries and employs 90 people directly here.