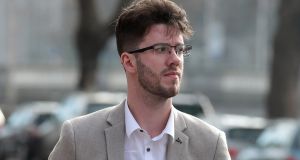 Dillon Breen (24) said he was told the laser beam pen had ‘melted part of my retina’. Photograph: Collins Courts

A student who claimed he suffered a burn injury to his eye when another schoolboy accidentally shone a laser beam pen at him has been awarded €80,000 damages by a High Court judge.

The award is against the company which sold and distributed the sky green beam laser pointer pen.

Mr Justice Michael Hanna said the pen was a dangerous implement which did not comply with EU regulations and should not have been offered for sale.

The laser pen had been bought for about €10 on the internet by a schoolboy who brought it into St Kevin’s College, Finglas.

Another boy had accidentally pointed the pen at the eye of Dillon Breen, who suffered a burn injury to his retina.

Mr Breen, now aged 24, Ferndale Avenue, Glasnevin, Dublin, was a fifth-year student at the time of the incident on May 25th, 2012.

He had originally sued the school and the distributor, Syncron Ltd, Ballycoolin, Dublin, but, in the High Court on Thursday, his case against the school was struck out.

As judgment had previously been obtained against Syncron Ltd in default of appearance, Mr Justice Hanna assessed damages against the company which is understood to no longer be trading.

The judge said the school had been excused from the proceedings and bears no responsibility in relation to the unfortunate act. The laser incident happened when a teacher was momentarily out for the classroom but the judge said he was entitled to be out of the classroom on other necessary business.

The fault “lay entirely” with those who offered for sale through the internet this dangerous implement and they are “to be condemned for so doing”, he said.

Mr Breen had suffered a partial loss of vision in his right eye, will have that impairment for the rest of his life and will have to wear glasses, he said.

Mr Justice Hanna said there was “no doubt”, had the school been aware this implement was in the school, it would have taken action. In his evidence, Mr Breen said the other schoolboy did not mean to do something hurtful to him but shone the laser pen beam in his right eye.

“I felt a burning sensation immediately. I didn’t tell anybody, I didn’t want to be a rat on anybody,” he said.

He said he later had headaches and went to hospital where he was told he had “melted part of my retina”.

He had perfect 20:20 vision before this and now has a tick in the vision of the centre of his right eye. “It has taken 10 per cent of my vision,” he said.