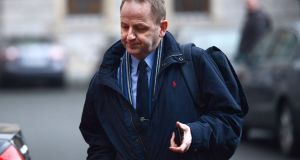 The Charleton report described Maurice McCabe as a genuine person who had the interests of the people of Ireland in his mind at all times. File Photograph: Cyril Byrne

The State wants to mediate several damages actions brought against it by retired Garda Sergeant Maurice McCabe, the High Court has heard.

The court heard on Monday the State is to write “an open letter” to Mr McCabe’s solicitors to see if several actions brought by him against parties including the Garda Commissioner can be resolved through mediation.

The mediation offer was referred to when one set of proceedings by Mr McCabe against parties including the Garda Commissioner, the Minister for Justice, the Attorney General; and former Garda commissioner Martin Callinan was mentioned before the court.

Mr McCabe’s lawyers had filed a motion seeking judgment over alleged failure by the defendants to file defences to his claim.

Gerard Meehan BL, for the State defendants, said his clients had not filed a defence as that would not help bring the sides together in a bid to see if a “conciliary mediation” could take place.

Counsel said the proposed mediation would involve all cases taken against the State by Mr McCabe and the offer was being made not just in the interests of all the parties but also “in the public interest.”

The state will write to Mr McCabe’s solicitors, Sean Costello & Co, to see if mediation was possible, he said.

Emily Maloney BL, for Mr McCabe, expressed her client’s concerns about any further delays in the cases.

Ms Justice Leonie Reynolds said she understood Mr McCabe’s concerns about delays but, in the circumstances, she was prepared to adjourn the matter for three weeks.

Separately, a number of pretrial motions in actions by Mr McCabe, his wife Lorraine and their four children against the HSE and Tusla the Child and Family Agency, were also mentioned before the court.

The McCabes had brought motions seeking judgments against the HSE and the CFA over alleged failure to file defences.

The McCabes, in those cases, are seek damages arising from false sexual abuse allegations made against him.

The pre-trial motion in the cases were struck out on Monday on consent of the parties. It was agreed the defendants could have an additional four weeks to file their defences.

Mr McCabe retired from An Garda Síochána last October following 30 years service, weeks after the publication of the Disclosures Tribunal report in which Mr Justice Peter Charleton described the Cavan-based sergeant as having done the State “considerable service”.

The tribunal found former Garda commissioner Martin Callinan and Supt David Taylor had engaged in a smear campaign against Mr McCabe in response to his whistleblowing.

The report described Mr McCabe as a genuine person who had the interests of the people of Ireland in his mind at all times.

5 Coronavirus: 539 new cases and 14 further deaths in the State as more than half a million doses given