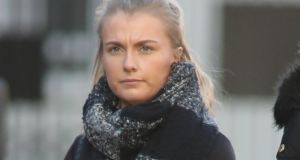 Ailbhe Cole has lost a High Court action for damages against her former school over an injury suffered playing hockey. Photograph: Collins Courts.

A student may face a large legal bill after losing a High Court action over an injury sustained while playing hockey at her former secondary school in south Dublin.

Mr Justice Raymond Fullam said Ailbhe Cole (22) slipped on wet grass as she retrieved a ball that had gone out of play and that the incident was “an accident pure and simple”.

“Strange as it may seem, accidents can happen where ‘somebody else’ is not to blame,” he said. “This was such an occasion.”

The judge also said sport “is an important part of education in schools and not just just in developing healthy minds in healthy bodies”.

“If schools were to be made legally responsible for pupils slipping on wet or mucky grass in the course of outdoor games, it would be impossible to include any outdoor sport on the curriculum.”

Ms Cole, of O’Rourke Park, Sallynoggin, was a Leaving Cert student at Sisters of St Joseph of Cluny in Killiney when the incident happened while she was playing hockey on a winter’s evening on the shale and grit school pitch.

She alleged failure to install sufficient lighting on the playing field and claimed hockey was allowed to be played in the absence of sufficient lighting. She also claimed the ground around the kerb area of the pitch was slippery.

The claims were denied and the school contended hockey training only occurred when light permitted. The school has since got a new pitch and facilities, the court heard.

In his judgment, dismissing the case, Mr Justice Fullam ruled Ms Cole’s injury was not caused as a result of any negligent act or ommission on the part of the school or any deficiency in the facilities provided by the school.

“Specifically, the injury was not caused as a result of a training session being held in darkness or inadequate light or because there was some structural defect or trap in the grass permieter,” he found.

Ms Cole had slipped while running on wet grass in a maintained area and where she could see where she was going, he said.

She was familiar with the area from playing there for all of her seconday schooling.

When Ms Cole’s counsel Niall Beirne SC asked that costs of the two day action not be awarded against his client, a student starting out on her adult life, the judge said costs follow the event (go to the winning side) and he made that order. The judge said he was sure the sides would be able to come to some agreement on the matter.