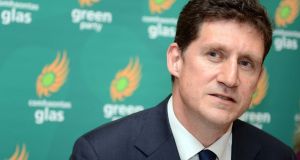 RTÉ is seeking its legal costs against a Green Party trustee following the rejection of his legal challenge to the broadcaster’s refusal to invite Green Party leader Eamon Ryan to participate in a televised party leaders’ debate.

Just hours before the debate, Ms Justice Marie Baker gave her High Court ruling dismissing arguments by Tom Kivlehan, Green Party trustee, that RTÉ’s criterion stipulating only parties with three TDs in the outgoing Dáil could be invited to participate was unfair, undemocratic and unconstitutional and breached RTÉ’s legal obligations as a public service broadcaster.

The judge found RTÉ’s criteria were “sufficiently reasonable and impartial”, not unfair or irrational, and proportionate to the needs of the political debate and the public’s right to be informed and educated in an engaging live programme.

Her primary difficulty with the arguments advanced by Mr Kivlehan was that many of the considerations the Greens urged should have been taken into account by RTÉ would have favoured the party over other possible participants in the TV debate, she said.

The judge also ruled that RTÉ’s choice of criteria could be judicially reviewed and said “fundamental and core democratic ideals”, including the right to freedom of expression, were raised in the proceedings.

When costs issues came before the judge on Wednesday, Nuala Butler SC, for RTÉ, said it was seeking its costs and the normal rule that costs go to the winning side should apply.

Siobhán Phelan SC, for Mr Kivlehan, indicated her side would contend the case raised issues of public importance and the normal rule on costs should not apply.

As the judge was hearing another matter, she said she would hear arguments on the costs issue on Wednesday, March 2nd.

1 Coronavirus: Surge of cases hits nursing homes as clusters jump to 38
2 Ireland has strategy to ‘break the chains’ of coronavirus - WHO’s Mike Ryan
3 We need to cancel the Leaving Cert and give students predicted grades
4 Coronavirus: Situation in Ireland ‘misrepresented’ because of limited testing
5 Spain has most coronavirus cases in Europe but death rate slows
Real news has value SUBSCRIBE