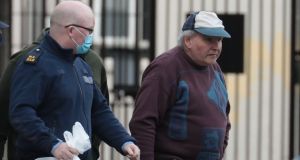 Three siblings released from custody last Friday after agreeing to vacate their repossessed home in Co Roscommon had failed to make contact with their solicitors since then, the High Court has been told.

Michael Anthony, David, and Geraldine McGann were brought before the court last Friday to answer why they should not be jailed for contempt of orders to leave and not interfere with a bank’s possession of the house and land at Falsk, near Strokestown.

KBC Bank obtained the possession order several years ago arising out of a €431,00 debt on the property from a loan to its registered owner Michael Anthony McGann.

They were evicted in 2018 but the house was later the scene of an attack on security men employed to secure it. The security men were forced from the property by a group of masked men and a number of vehicles were burnt.

The McGanns, who were not involved in the incidents, returned to the house and the bank then sought to have them jailed for contempt of court orders by failing to vacate.

They were again ordered by the court to leave last March but again returned.

Due to the pandemic, the bank did not immediately return to court but last Friday the trio were brought before Ms Justice Leonie Reynolds by gardaí to answer this latest alleged contempt.

There, represented by solicitors, they undertook, pending a full hearing of the contempt application, to leave the house and remove livestock from the land.

They were released and the matter was adjourned to a remote hearing on Wednesday when Ms Justice Reynolds was told the McGanns had not contacted their lawyers since Friday and efforts to contact them were unsuccessful.

Lawyers for all three, who were hoping to have replying affidavits from the McGanns prepared over the bank holiday weekend, said in light of not receiving instructions they (solicitors) were not in a position to continue to participate in the process.

The court also heard a man, who is not a solicitor, handed certain documents to the registrar just before the remote hearing began.

Rossa Fanning SC, for KBC, said he was concerned in the light of all this that it did not show an intention by the McGanns to comply with the court orders or undertakings they gave and that this matter was not going to be straightforward.

His client would take steps to secure the house, which is still vacated, and keep the court informed of these steps on Friday. Efforts would also be made to contact the McGanns and inform them of the adjourned Friday date.

The judge agreed to adjourn it to Friday and said the McGanns would have to turn up in person to say the solicitors they had last Friday were no longer representing them. The solicitors themselves should also try to contact them, she said.

As there was another application related to the case listed for the afternoon on Wednesday, the judge said the matter would be called again in the afternoon to see if the McGanns turned up.

In the afternoon, the McGanns did not appear. That matter will now be dealt with on Friday.